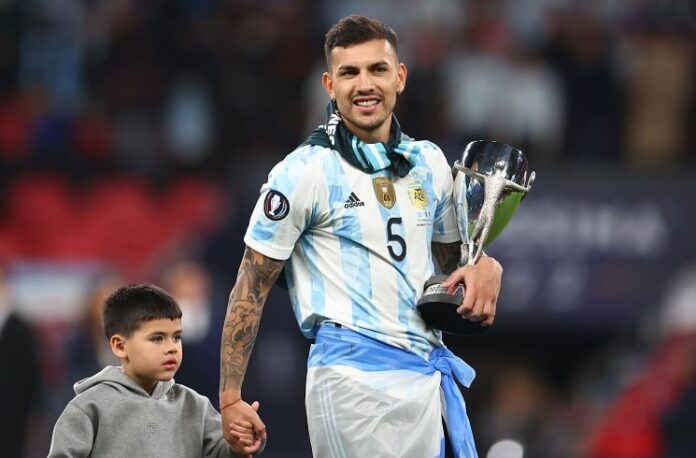 Paredes has been part of the Argentina national team since since Lionel Scaloni took over as coach. Now a starter in midfield, Paredes has already played in two Copa Americas. Speaking in an interview with Radio La Red, here is what he had to say:

“When we were eliminated at the 2019 Copa America against Brazil, the group got much stronger and after that, the results helped us.

“Football has come a long way. I was a victim of my way of playing but I knew what I could give to Argentina.

“I feel the support but I’m not undisputed (starter). The only one is Leo Messi. The rest of us have to show that we are at the level of the national tea. Dibu, Cuti, Rodri, Gio and Lautaro have been doing well for a long time. But only Messi is undisputed.

“We very much enjoy being with the national team. Not only playing but the day to day. Coming to the national team is a privilege and we enjoy it. In the midfield of the national team, we are three playmakers and that gives us a lot of play. We are the young guys who grew up really fast. We got strong.

“If we don’t recover (the ball) quickly, we don’t have fast players to recover it. Without the ball, we would suffer a lot.

“Winning at the Maracana gave us a lot of confidence and it was seen after that, we started to play better. It was a huge relief.”

The Argentine also spoke about the coach:

“We have put a lot of trust in Scaloni from the first moment, the same way he did with us. He kept a group that is still there today. Scaloni gives confidence to the player, he is very close, he talks a lot and makes things clear.

Regarding Argentina playing against a European team:

“In Argentina, there was talk that we had to test ourselves against a European team and we did it in the best way. We were protagonists and that was more than important. The undefeated record is important for history but it doesn’t worry us. If we think about it, when we lose, we are going to suffer a lot.”

In regards to Lionel Messi and the World Cup:

“If we win the World Cup, I would be happier for Messi than I would be for myself. Hopefully it will not be Messi’s last World Cup. It’s difficult to go through four more years to play a World Cup. Let him play as a number five and I’ll move back, haha.

“Everyone has a chance to be world champions. We are going to try.”

He also spoke about PSG:

“I’m staying at PSG next season. It was a complicated year with PSG, it wasn’t easy for Messi either. He has been much better these last few months. I hope he starts the season in the best way.”

About Kylian Mbappe’s comments on football in South America:

“Mbappe and these types of players will never know what it is like to play at altitude, in the heat of Colombia and in those places.”