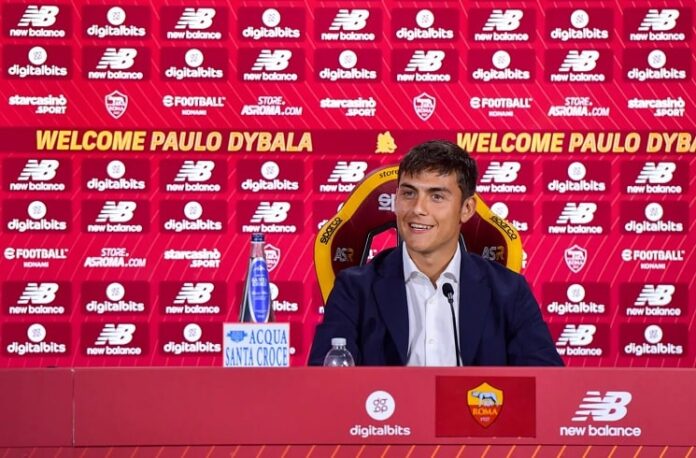 Paulo Dybala commented on joining AS Roma as well as his conversations with Jose Mourinho at a press conference.

Dybala was presented to the media on Tuesday as the Argentine spoke about several topics. He revealed how the contacts were prior to joining Roma. When asked if he sees himself more as a second striker or a playmaker, here is what he had to say:

“I can only say that decision will be down to the coach. I am sure that, based on each game, he will find the best solution for both me and for the team. I am ready to play in both positions, to play wherever I am needed.”

Regarding how important the phone call was from Jose Mourinho:

“In terms of the call from the coach, it was a real pleasure. The first time we spoke it was along with the General Manager. Then one day he wrote to me out of the blue and we spoke once more. I have had the pleasure of meeting the club president and his son, I spoke with the General Manager, I knew a few of the players. I would say that the call from all of them, the affection they showed me, was really important to me.

“The knowledge that the coach has and the confidence and belief the players have will be very important to keep improving and pursue the targets we have. I will try to always give my best and pass on all the experience I have picked up over the years, so we can continue to win.”

If Roma is the ideal place for him to express his qualities:

“It’s true that football has changed a lot in that regard; now you see players that are more physical and faster but you see less dribbling and less skill. But what matters is the final result.

“I want to win, everyone wants to win, and that has to be the primary objective. Beyond that then yes, I have certain characteristics that I have relied on my whole career and I will work hard to do what the coach wants from me. But I will play in a way that helps the team.”

On if we can see the best version of Paulo Dybala at Roma:

“Obviously, that’s what I’m working for. Always. Every day. I hope that will be the case. I am trying to get myself in the best possible condition in order to do that. There will be lots of games from now up until the break for the World Cup. So I will try to make sure no stone is left unturned.

“I have years of experience from Juventus, at a team used to winning and one where that demand is passed onto you as soon as you arrive.

“So I will try to contribute as much as possible inside the dressing room as well, especially considering we are a young squad: I will try to use my experience to help the team win and also help us stay positive and focused during the tougher moments that will surely come at points during the year.”