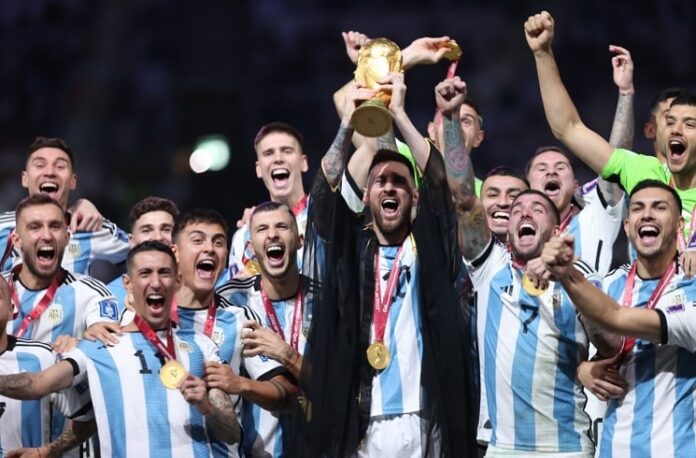 ARGENTINA HAVE WON THE WORLD CUP!

In what was arguably the best World Cup final of all time, Lionel Messi and Argentina lifted football’s biggest prize. It was a dream start for Argentina.

Angel Di Maria would get fouled in the penalty area and Argentina would be awarded a penalty kick. Up stepped Lionel Messi and he would make no mistake scoring. Lionel Messi had now scored in a World Cup final.

Angel Di Maria wasn’t done. A great counter attack started by Lionel Messi and it would fall to Alexis Mac Allister. He would square it to Angel Di Maria who would score to make it 2-0 for Argentina.

But the dream start, slowly started to look like a nightmare. Despite holding a 2-0 lead for 80 minutes, it was a penalty by Nicolas Otamendi which gave France a life line. Mbappe would score the penalty and 90 seconds later, would score France’s second goal of the match.

It was now 2-2 and going into extra time. France continued to press but a shot by Lautaro Martinez was saved by Hugo Lloris but Lionel Messi would get to the rebound and score. It was now 3-2 Argentina with minutes left in extra time.

A corner kick by France and a shot into the penalty area touched Gonzalo Montiel’s arm and France were awarded another penalty. Mbappe would score and we were off to penalty kicks.

France were up first with Mbappe who would score. Lionel Messi was up for Argentina and he would score. But just like every penalty shootout with Emiliano Martinez, he would be the difference.

Emiliano Martinez would save Kingsley Coman’s effort and Dybala would convert his to make it 2-1 for Argentina. Aurelien Tchouameni was up next and he missed his penalty. Leandro Paredes would score and it was 3-1 for Argentina.

Randal Kolo Muani had to score and he did. The pressure was now on Gonzalo Montiel. And with his kick of the ball, he would score and Argentina were crowned World champions.