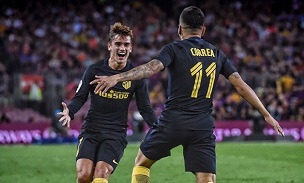 Angel CORREA is apparently wanted by a big European club.

According to reports, Atletico Madrid’s Angel CORREA is wanted by Italian champions Juventus. The club tried signing CORREA back in 2014 before he signed with the Spanish club. CORREA, who has a contract with Atletico until June 2009, is being monitered by the Italians.