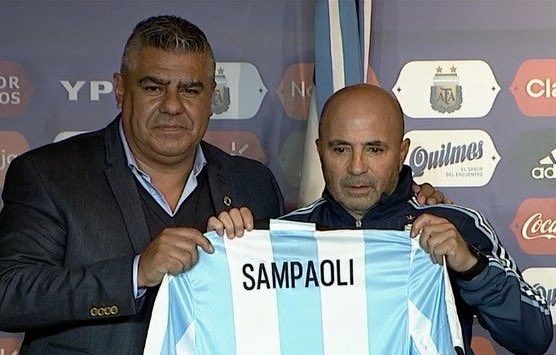 Jorge SAMPAOLI has officially been presented as the new coach of the Argentina National Team.

SAMPAOLI was presented along with his coaching staff at a press conference. AFA president TAPIA was also present when announcing SAMPAOLI as the new coach of Argentina. At the press conference, here’a what SAMPAOLI had to say:

“This is a dream I’ve had for a long time. We have to build a team that respects the history of Argentinian football. There are more than 100 players being watched.”

“There were situations where we had to wait. I thank the president (TAPIA) for his patience. The difficulties of the World Cup Qualifiers is real. Argentina has the resources to qualify. This National Team is not one of only football players but of 40 million Argentinians.”

“The contract is until 2022. Hopefully we can build something important for Argentinian football.”

“The important thing is that MESSI is surrounded by compatible players. I spoke to him yesterday and he’s very excited. Mauro ICARDI’s inclusion is due to his form with his club. Football is felt and lived. It’s not studied.”

“I dream of being at the World Cup and putting together a team to go as far as possible. I’ve always had an Argentina shirt at home. For me, it’s vital.”

“For MASCHERANO, we called him up with the intention to play him as a central defender like at Barcelona. When we will be with the players, we will evaluate to see who is best fit to play against Brazil. We have to think about three or four systems but the important thing is how it functions against a team like Brazil.”

“A proper analysis of the youth system has to be done.”

There was also a mention by SAMPAOLI that there would be a local based team put together and they would try to organize a match in July.