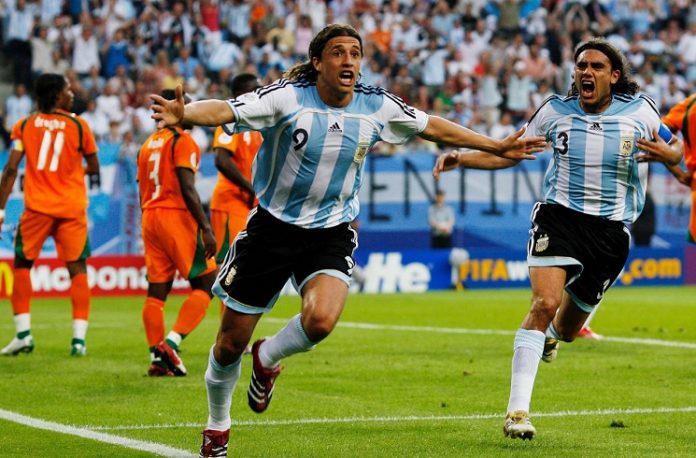 On this day in 2006, Argentina defeated Ivory Coast 2-1 at the FIFA World Cup.

It was Argentina’s opening match of the tournament in Germany 2006 and it was against World Cup debutant, Didier DROGBA’s Ivory Coast. A star studded Argentina team coached by Jose PEKERMAN who had managed many of the players from youth level. Argentina picked up a 2-1 win with Hernan CRESPO scoring the first, Javier SAVIOLA the second and Juan Roman RIQUELME assisting both.

Roberto AYALA had a goal disallowed early in the 14th minute after his header appeared (or not) to have crossed the line. Luckily for Argentina, a foul on Hernan CRESPO lead to an Argentina free kick. Up stepped RIQUELME who sent one into the Ivorian area and CRESPO was the first to pounce on the ball. Just like that it was 1-0 for the Albiceleste.

The second goal was pure genius by Juan Roman RIQUELME. An absolutely deadly pass in from Argentina’s number 10 lead SAVIOLA in one on one with the goalkeeper and SAVIOLA with the lightest of touches scored the second.