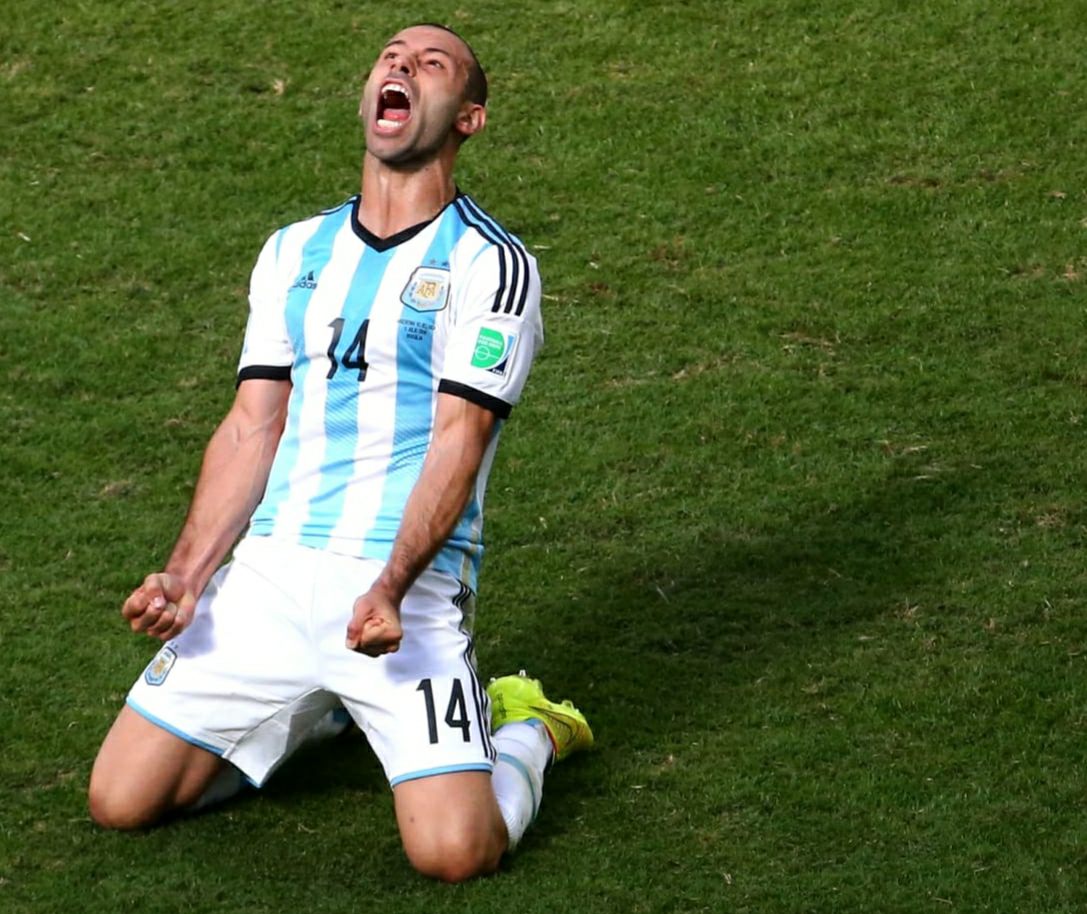 It was on this day in 2003 where Javier Mascherano made his senior international debut for the Argentina national team.

Despite not having played a single match for River Plate’s first team, Mascherano was already making the news. Then national team coach Marcelo Bielsa decided to include the defensive midfielder in the starting eleven when his team played eternal rivals Uruguay.

It was Diego Milito who scored both goals for Argentina but the bigger news wasn’t the double by Milito but that the 19 year old had started. Bielsa had fielded the following eleven for the match at the Estadio Ciudad de La Plata:

At the time, Bielsa was putting together a team not only for the 2004 Copa America but also for the Olympic games in Greece next year. To no one’s surprise, the defensive midfielder was included in both tournament squads and while the tournament in South America ended on penalty kick heartbreak, the one right after ended with an Olympic gold medal.

He was also part of the 2005 Confederations Cup team which also lost in the final. By 2006, he was a well and truly established starter with the national team. Jose Pekerman had since replaced Marcelo Bielsa at the helm and Pekerman made sure that Mascherano continued in his defensive midfielder role come the tournament in Germany. The team lost on penalty kicks once more but Mascherano was an integral part of that team.

Javier Mascherano has played for some of the biggest clubs in the world. In Argentina, he’s a product of River Plate’s youth system. From there, he made the jump to Brazil where he played with Corinthians. His switch across the Atlantic didn’t start off on the right foot.

Mascherano, along with fellow Argentine Carlos Tevez both joined West Ham United and while the team did not get relegated, the duo soon left Upton Park. Tevez went to Manchester United and Mascherano joined Liverpool. He formed a formidable partnership in midfield along the likes of Xabi Alonso and Steven Gerrard.

Argentina were taking part in yet another tournament, Javier Mascherano’s fourth senior one, five including the Olympics. It was the 2007 Copa America and Mascherano turned into MascheGol! Two goals in the tournament, the first was a match winner. It was on July 5 against Paraguay and Mascherano scored his first goal for his country.

Just two days later, Mascherano turned into MascheGol once more as he scored in the 4-0 win vs. Peru. The great man would have to wait nearly 7 years for him to score his third international goal. The tournament would end once more in tears but Mascherano’s European club career was in full swing.

A Champions League final with Liverpool awaited him that season and while he wouldn’t win that tournament with Liverpool, his next club would give him that chance.

Mascherano would make history in the summer of 2008 becoming the first Argentine athlete to win two gold medals. Argentina went into the 2008 Olympic games in Beijing as heavy favorites and he, along with Lionel Messi, Juan Roman Riquelme, Sergio Aguero, Ezequiel Garay and many otheres helped Argentina capture their second Olympic gold medal in football.

Fast forward to 2010, Diego Maradona was coaching the Argentina national team and Javier Mascherano was the captain. Maradona was once quoted as saying “It’s Mascherano + 10 others”, implying the importance that he had on the team despite the squad boasting such “big” names like Lionel Messi, Juan Sebastian Veron or even Carlos Tevez.

Catalonia would come knocking in the form of FC Barcelona as the Argentina captain joined Lionel Messi and Gabriel Milito at the Camp Nou. Mascherano would have to make do with the double in his first season at the club. A league title along with a Champions League winners medal, his first two trophies in Europe. A last minute tackle against Arsenal allowed Barcelona to advance in the tournament and eventually would go on to eliminate rivals Real Madrid in the semi finals.

What makes the final even more memorable was that Mascherano played as a center back in the 3-1 win vs. Manchester United at Wembley.

He lifted a total of 19 trophies during his time with the club, three of which came in one season when the team won the treble.

With Argentina, he was part of the team which lost to Uruguay on penalty kicks at the 2011 Copa America. Ironically enough, that match was played on July 16, 2011, 8 years to the day where Mascherano made his Argentina debut.

His third goal for the Argentina national team was coming up. In a pre-World Cup preparation match, it was Argentina against Trinidad and Tobago. Messi took the free kick as his effort hit the post and fell to Javier Mascherano. The great man extended his foot and a poacher like goal from the defensive midfielder gave Argentina the 2-0 lead.

The next tournament for Argentina was the 2014 World Cup. While he wasn’t wearing the captain’s armband anymore, Mascherano was still very much a leader. Playing in what were arguably the best seven matches of his entire career, Mascherano is probably best remembered for his last ditch block against Arjen Robben in the semi-finals in Brazil. It was later revealed that Mascherano had torn his anus in the tackle but that helped Argentina reach their first World Cup final in 24 years.

A World Cup final came and went, as did two other Copa America finals and Mascherano was now in his final tournament of his career. The 2018 World Cup with Argentina. Not the same type of preparation which saw them reach the final four years prior, Mascherano still gave it his all and announced his retirement from the team on June 30, finishing up a historic 15 year career.

Playing a total of 147 matches for Argentina, it’s been two years since his retirement and his spot is still very much up for grabs. A wonderful career, a great man and while also making the switch to Hebei China Fortune, Mascherano can still be seen tackling players in the Argentine league with Estudiantes.

Thank you to Javier Mascherano on a great career!