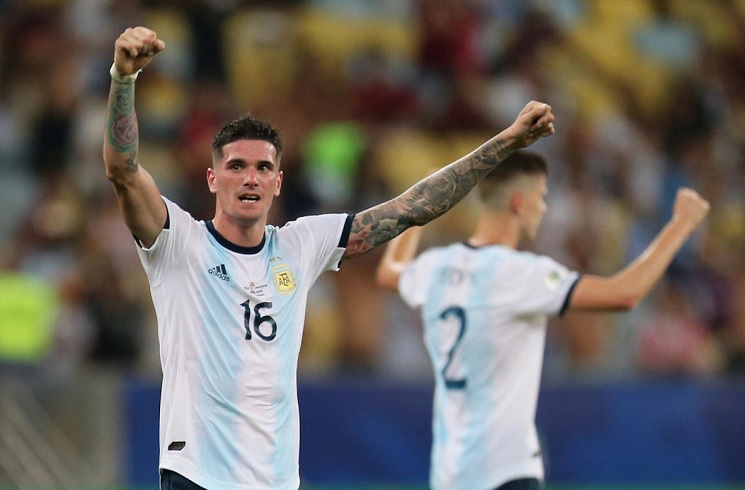 Rodrigo de Paul has been continuously called up by Argentina coach Lionel Scaloni to the national team and spoke about it all.

De Paul made his Argentina debut two years ago and has since become a main stay in the team. Playing at the Copa America and selected by coach Lionel Scaloni for next month’s World Cup qualifiers, here’s part of his interview with FIFA where he talked about it.

Speaking of the national team, what’s your earliest memory of the World Cup?

“The 1998 edition! It seems unbelievable because I was only four years old, but I wanted to play like my two brothers. At the local club there was no team for my age group, so I played with a side two categories higher, and they stuck me in goal.

“That’s when they started calling me Lechuga [the nickname of then Argentina goalkeeper Carlos Roa]. I was even given a replica of the purple jersey he used to wear at the time.”

As a fan, how has your experience of the World Cups been?

“It’s changed as I’ve got older. I remember getting up early to watch the games in 2002 and the bitter feeling after the Sweden game. When Germany knocked us out in 2006, I was at school.

“The most recent ones I suffered with friends, who are all into football. Russia 2018 was a bit harder to take as I had friends in the squad like [Nicolas] Otamendi and [Paulo] Dybala.”

There was some talk about you even making the squad for Russia. Did you get excited about the prospect?

“No. When you get to this level, you know that, with very few exceptions, it’s rare to be called up for a tournament if you’ve not been involved in qualifying. And I hadn’t even made my national team debut at that point. So I didn’t want to get excited.

“I’d already been mentioned for a possible place in the squad for the [2016] Olympics, and when it didn’t happen, it hurt a lot.”

How did you find out about your first call-up in September 2018?

“The sporting director of Udinese, who knew Walter Samuel from his Roma days, told me he was going to call me. I thought he was going to tell me that they were monitoring me, but when he confirmed I was in the squad, it was very emotional. Even I didn’t realise the magnitude of what had happened until I was on the pitch listening to the national anthem. That’s when it really hit me.”

You quickly became one of the faces of the next-generation Argentina team, on and off the pitch.

“I don’t know if I’d call us the new team. For me, we’re part of the team in this moment in time. And after the impact of being called up and playing, of fulfilling a dream, what you feel is a sense of responsibility. It’s no joke representing 45 million Argentinians. Luckily, we did well at the Copa America, even if we didn’t win the title. Yes we lost in the semi-finals to Brazil, but the fans RECOGNIZED what we did all the same.”

Is it difficult to have to listen to some people question Scaloni for his lack of experience?

“He may lack experience as a head coach, but he has 30 years’ experience of the dressing room. He understands how groups work, knows his trade, came up through the national youth teams, played at a World Cup… Like Samuel, [Roberto] Ayala and [Pablo] Aimar, they know the FA’s headquarters better than we do!

“I don’t know how many people would have had the determination to implement the changes he made or to call up players not among the top teams in world football.”

The team seemed to click as a group at the Copa America. Would you agree?

“The team that was selected there is the best group I’ve ever been part of. It started to come together with the coaching staff and began incorporating more and more things: players, concepts, moments… The key thing is that everyone knows what they’re expected to do, nobody is trying to hog the headlines. The only untouchable one is Leo. The rest of us contribute by doing whatever is asked of us.”

Talking of Messi, he has spoken highly of you. How does that feel?

“You look up to him obviously, but when you start sharing things with him, he is so transparent that, instead of telling him what you think of him, you feel more like asking him about his little kids or of reminding him of the time he took you out with his studs up in a Valencia-Barcelona game (laughs). When he becomes your captain, you’d go to war for him if he asked you to.”

Do you think the pandemic disrupted the momentum you would have been carrying into the qualifiers?

“Absolutely. The Brazil game ended one run, but then we played seven games without being beaten. While for many in the squad, this will be the first time playing World Cup qualifiers, we’ve had plenty of discussions about it and we’re well aware of the magnitude of what we’re heading into. Hopefully, we can start in October and get the first game behind us.”