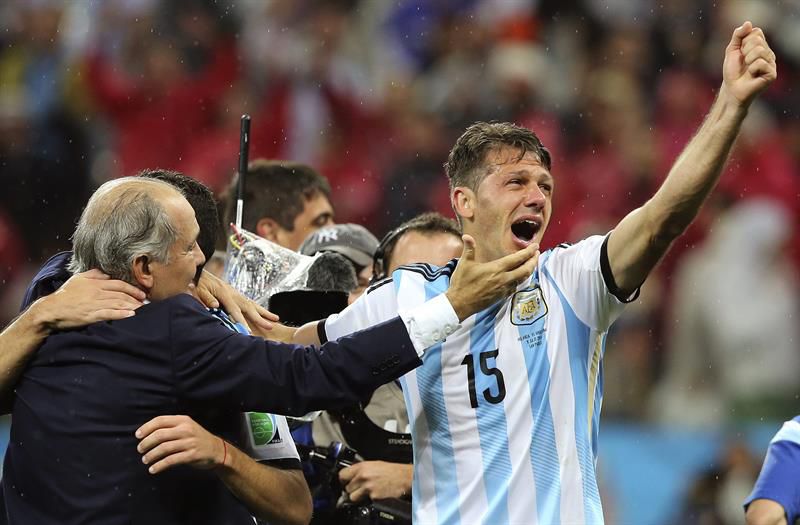 Martin Demichelis took part in two World Cup tournaments for Argentina, reaching one final and da quarter final loss in the other.

Demichelis, now retired, has won multiple league titles in different countries. He was a veteran of that 2014 Argentina team which made the World Cup final and speaking in an interview with TyC Sports, Demichelis revealed some things from that tournament. Here’s what he had to say:

“The win which made me the most happy was the penalty kicks against the Netherlands. The relief from the people, that was ultimate adrenaline and happiness on a pitch.”

He also revealed that an important part in the tournament was at half time vs. Bosnia-Herzegovina where the players asked Alejandro Sabella to change his tactics:

“It was an exchange of ideas and that just enhances the coaches who know how to ask and how to listen. He himself (Alejandro Sabella) and his coaching staff, after the questions and answers, decided to make a change. And that to me seems extraordinary.”

Despite playing in the final, Demichelis was not an automatic starter at the World Cup.

“It’s true that during the World Cup I nearly knocked on Sabella’s door to ask him to pick me. I saw that the World Cup was passing me by. I was training well.

“A childhood friend wrote to me saying that Ruggeri spoke that if he was Demichelis, with the amount of titles he has and at 33 years of age, he’d have knocked down the coach’s door and asked to be selected.

“I told him that I hadn’t seen or read anything. I’d want to avoid knocking down a dinner. Dinner was over and Alejandro called Leo to tell him that he was going to make two changes. Leo came to me and told me to get ready because I was going to play. So I didn’t have to knock down any doors, ha.”

Regarding the 2014 World Cup final vs. Germany:

“I remember having played a good game. It was a very intelligent game against a team who just four days prior had scored seven goals. At no point did we ever see ourselves as superior. We had three or four clear chances.

“I have never gone back to watch it. I always said I would go back and watch it one day if my son asked me.

“Sometimes I’ll be passing by some electronic store with televisions on and they’d air some goal and I would appear in it. With Pablo Zabaleta, we played together at Manchester City and the coach was Pellegrini. He worked with us so that the central defender would go cover the full back. It’s something I had automatically. Schurrle played a low cross in and Gotze was there. The dream was over.”

“In 2014, the pain of losing a final lasts forever, in 2010, we were not ready nor believed that we’d exit. We had a great team. We had Diego and Leo together.

“Seeing Diego cry in the locker room as if he was a child was very sad.”