Mundo Albiceleste
Home Latest News On this day, Argentina with a 4-1 win vs. United States at...
Facebook
Twitter
WhatsApp
Telegram 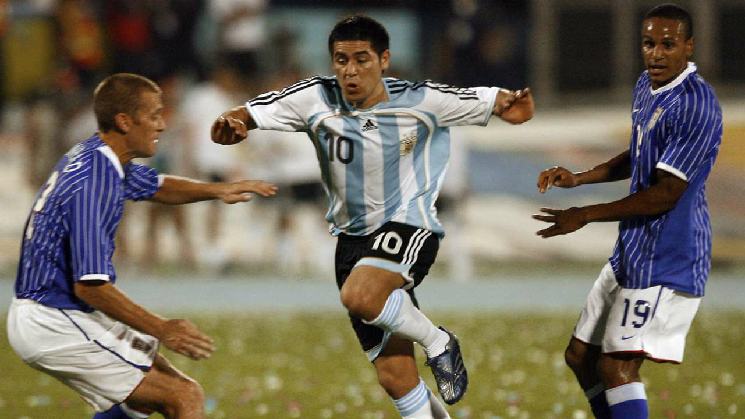 On this day in 2007, Argentina managed a 4-1 win vs. the United States at the Copa America.

It was Argentina’s opening match of the Copa America against visitors United States. Alfio Basile had taken over Jose Pekerman after the 2006 World Cup and numbers were on Basile’s side. Coco Basile was and remains the last manager to coach Argentina to a trophy, having won the 1993 Copa America.

Not only is Basile the last coach to win a trophy, he had a 100% undefeated record at a Copa America. He had yet to lose a single match in the tournament. Basile fielded a strong team to start the tournament in Venezuela:

It was a diamond shaped team with Mascherano as the defensive midfielder, Cambiasso and Veron as the central midfielders and Riquelme as the playmaker. However, despite the strong team, it was the United States who took an early lead.

Gabriel Milito with a foul and a penalty as Eddie Johnson would score passed Abbondanzieri. With the United States taking the lead, it didn’t take long for Argentina to draw level.

A free kick taken short by Veron to Riquelme as he would cross it into the penalty area. A scramble and it would find Crespo for his first of the tournament. The second Argentina goal would come in the second half.

Lionel Messi would play a lovely ball into Crespo and a predator like finish by Hernan gave Argentina the 2-1 lead.

Alfio Basile would make three changes as Pablo Aimar, Carlos Tevez and Fernando Gago would all be brought in. And two of those three would score.

Crespo with a pass to Heinze who made the overlapping run and his cross found Aimar who made an unmarked run inside the penalty area and his header would make it 3-1 for Argentina.

Riquelme would create the fourth goal. His cross found Tevez who had beat the offside trap and he was one on one with the goalkeeper and would score his first goal of the tournament.