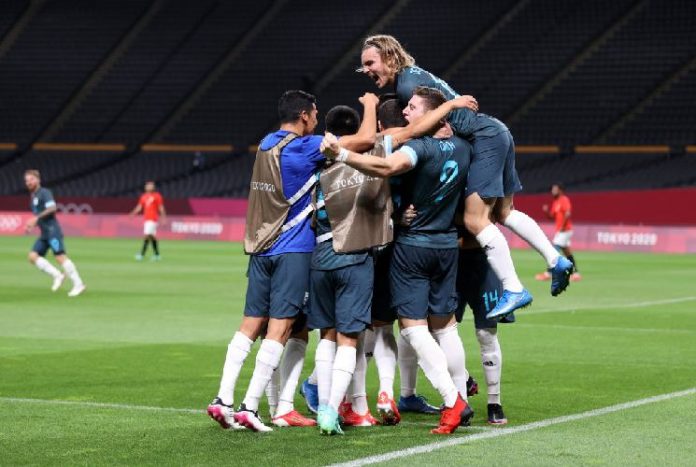 Argentina Olympic coach Fernando Batista could not be entirely blamed for his team crashing out in the group stages of the tournament as once more, an Olympic coach did not have the entire backing of the clubs.

For the second consecutive Olympic tournament, Argentina were eliminated in the first round. After winning two back to back gold medals, the first in Athens in 2004 and the second coming in Beijing four years later, Argentina have not gotten close to a podium finish ever since.

At the time, reigning Olympic champions in football, the defending gold medalists failed to qualify for the 2012 London games and in 2016, just like in Tokyo, they were out after three matches. Reading the names of the 2008 gold medal winning squad is like reading an all star team of players.

Going back even further in 2004, once more, a star studded team. Carlos Tevez, Javier Mascherano, Roberto Ayala, Javier Saviola, Gabriel Heinze, Fabricio Coloccini, Kily Gonzalez and the list goes on and on.

This time around, there were arguably more “big” names left out than those that were called-up. But maybe not much of the blame can fall on Batista.

All eight of those players won the Copa America with Argentina. However, all of them were eligible for the Olympic team as well. In addition, the likes of Juan Foyth (Villarreal), Matias Zaracho (Atletico Mineiro), Matias Palacios (FC Basel), Marcos Senesi (Feyenoord), Leonardo Balerdi (Olympique Marseille), Dario Sarmiento (Estudiantes), Cristian Medina (Boca Juniors), Exequiel Zeballos (Boca Juniors), could have been in the side as well.

Fernando Batista was allowed to take three overage players to Tokyo. He had initially picked two in goalkeeper Jeremías Ledesma and Lucas Alario. Ultimately, it was only Ledesma who went as Alario ended up missing the games due to injury. That left the spot open for two overage players.

Paulo Dybala, who was completely left out of the Copa America squad, could have been selected as one of the players over the age restrictions. Mauro Icardi has yet to take part in a tournament for Argentina. He was another one who stayed at home.

Which begs the question as to why none of those players mentioned made the squad. You could make the argument and say that the eight players which won the Copa America would need the rest of the summer off after a long club season. That would be understandable.

However, it’s odd that Batista was not relying at all on Foyth, Zaracho, Palacios, Senesi, Balerdi, Sarmiento, Medina or Zeballos. The team played two friendly matches in June prior to the Olympics. Matches which Dybala, Icardi, Palacios, Senesi or Balerdi (all of which are based in Europe) could have used to have been integrated into the team.

It’s no secret that some of the bigger clubs like Boca Juniors and River Plate back in Argentina would not allow their players to take part in the Olympics. And perhaps that is why we didn’t get a single player from any of those two clubs. Since winning the second gold medal in Beijing, some Argentine clubs have become somewhat hesitant in releasing their players for the tournament.

There was a clash between then Olympic coach Gerardo “Tata” Martino and the Argentine clubs back in 2016 when the clubs reportedly refused to release the players for the games in Rio. Instead, Martino stepped down as coach and 1986 World Cup winner Julio Olarticoechea ended up managing the team. He would go on to reveal that he had to ask his daughter for money because there was nothing from the Argentine federation:

“Caldera, my assistant, does a thousand things. He earns 18,000 pesos per month and for three months now he hasn’t gotten paid. He organized everything for the guys, he’s helped us a lot.”

While 2016 was a total fiasco, this time around, it was slightly different. Looking beyond the player selection, Batista himself got it wrong more often than not throughout the tournament. Some questionable decisions and a clear lack of a playing style was there for all to see. But some people underperformed as well.

Alexis Mac Allister was one of the stars for Argentina and was one of the main reasons why the team qualified for the Olympics. But even he underperformed.

Arguably Argentina’s best player of the tournament was the only overage player, Jeremías Ledesma of Cadiz. A clean sheet, 11 saves and four goals allowed in three matches, the team was not eliminated because of him. If anything, the team still had a chance because he was making those saves. But as mentioned, it was the lack of proper tactics, players underperforming and several names missing from the squad which meant that Argentina are out of the tournament.

Facundo Medina scores for Argentina in 1-0 win vs. Egypt at Tokyo Olympics