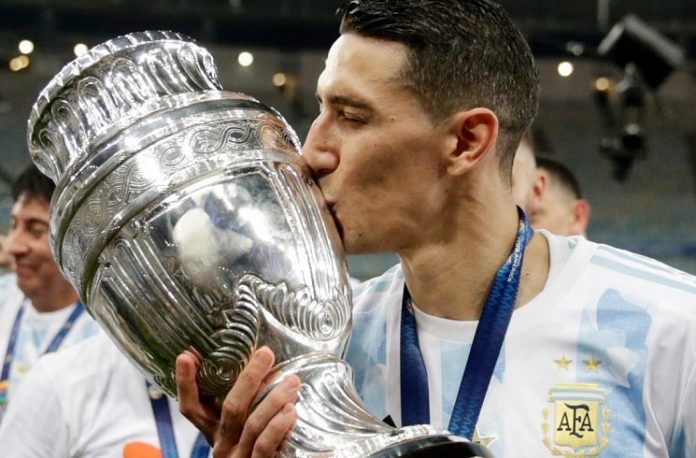 Angel Di Maria, the hero of the Copa America final for Argentina, spoke about winning the trophy and his friendship alongside Lionel Messi.

Di Maria scored the goal of his life against Brazil on July 10 to win the Copa America for Argentina. And following the final, Lionel Messi joined PSG and is now playing alongside him. Di Maria spoke it in in an interview with TyC Sports. Here’s what he had to say:

“In my career, I was missing the icing on the cake: Playing with Leo (Messi) at a club. I had several chances to go to Barca. It makes me happy to have him every day and to see what he does and not only when we are with the Argentina team.

In regards to his friendship with Lionel Messi:

“We are the first two who arrive to training, it’s true. Me first, I’m there just a few minutes before. After that he gets there and we prepare some mate.

“I always call him “Enano” (midget). At first no but when the friendship started, I started saying that. I think it’s like how he calls me Fide, I call him Enano, it was a while back and it will always remain that way.

“I treat him like another person, how he likes to be treated. He doesn’t like the show. That’s why he always hangs out with, the people with whom he has more of a relationship with, the one’s with whom he gets along with best, are the one’s who treat him equally and make him feel that way.

“Because if you treat him like what he is, an alien, you have him in that bubble which he doesn’t like. Because he likes to share moments, go out and have a BBQ, have some mate, have a good timne, laugh.

“We mess around and everything, in the press, they say that he is an alien because he is, he is the best in the world. But at the end of the day, for us, he’s Leo. He’s the midget and we tream him that way.”

He also spoke about Lionel Scaloni and when he was not being called to the Argentina national team:

“It was always very good and that’s why it was bad for me when I wasn’t called up. Because I was doing things well with my club, I deserved it. That was when I went out and spoke and he called me on the phone. We both started to cry.

“I told him I didn’t care being on the bench, I wanted to be there. I told him, if you want to try, try with others. But call me up, I want to be there.

“He knows that for me, the Argentina national team is unique, it’s everything for me.

“At noon, the day of the final he called to tell me he wanted to talk. To tell me that he didn’t know if I was going to start or be on the bench. To ask me how I felt. I told him the same thing I said to Sabella:

On winning the Copa America:

“I had to go through a lot of shit to get to it. Had I not won anything with Argentina, the joy would not have been complete.”