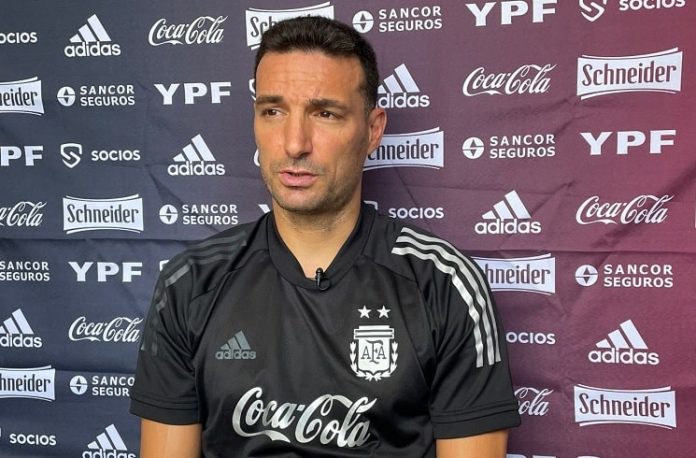 Lionel Scaloni, the first coach to lead Argentina to a Copa America trophy since 1993, gave his first press conference ahead of an Argentina match as a champion. Scaloni commented on the team, winning the Copa America, the match against Venezuela and the fans.

Speaking at the press conference, here is what Scaloni had to say regarding the match against Venezuela on Thursday:

“In principle, I think the match tomorrow will be of the utmost difficulty. It’s a national team which needs points and is a good national team. One which has made it hard for Argentina to win in the last World Cup qualifiers. Logically, getting a positive result tomorrow opens the door differently for the next matches. It’s useless to think that we can get the 9 points without having passed the first match. The first match always has to be won, the way to take on the next matches would become much easier.

“I won’t confirm the team yet because we just had our first training session yesterday. We spoke with most of the players to see how they are physically. Not much will change from the last match which was the final of the Copa.

“It’s three matches in a few days. We also have to be careful with the yellow cards. In any case, we will always put out what we think is the best. We are going to train this afternoon. Honestly, the conditions were not ideal but we already suffered at the Copa and are used to it. The pitch for tomorrow is not that bad.”

In regards to the clubs not releasing players:

“Regarding the clubs, we never had a refusal. We spoke and we reached a conclusion that they had to come.”

Regarding the statement by Aston Villa that Emiliano Martinez and Emiliano Buendia would only be available for two of the three matches:

About the World Cup qualifiers:

“Now a new challenge starts. Every national team wants to beat the champion. We have to take points and have a good qualifying campaign. It would be a mistake to think that the work is done. Every opponent is difficult, we have to try to do things in the best way possible because the level of difficulty will be at its highest.

“Coming to a national team is totally different than a club. We know that Lionel (Messi) is competing at a big club and that’s the most important thing.”

On winning the Copa America and having fans in attendance against Bolivia:

“It’s obvious that we brought joy to the people, that have needed it for some time. We are eternally thankful for their support. Unfortunately we were not able to celebrate because of what we are going through. We await the match against Bolivia with people in attendance and for them to see their idols as close as possible.

“I believe that the fans identify with this team because of how they defend the shirt. The players always give their maximum and I think that forges a mutual affection. The support from the people has always been felt. My way of being will not change on if we win or not. My image remains the same.

We became champions not long ago and now we have to go try and go back to being at that level. Had we not been champions, we would still go out and continued trying to be competitive. I’m left with the feeling that we are on the right path. We are proud of the way we work and the players feel identified with it.”