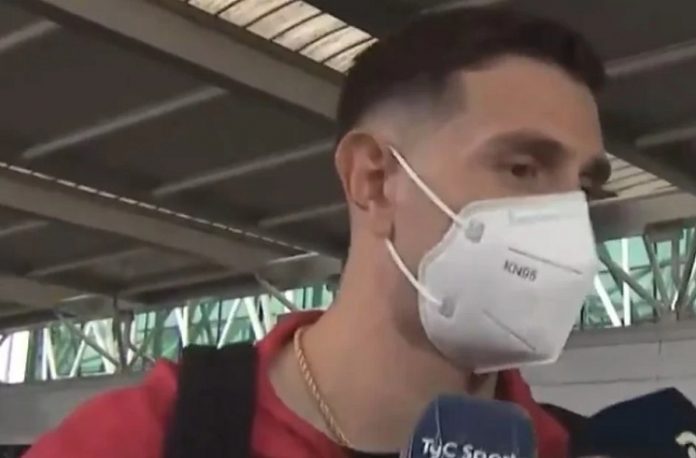 Emiliano Martinez spoke about the situation in Brazil with the Argentina national team as he was at the airport.

Martinez, who left the Argentina national team, was part of the controversy surrounding Argentina’s match against Brazil on Sunday. Emiliano Martinez, along with Cristian Romero and Gio Lo Celso all started for Argentina as Brazilian health agents marched onto the pitch. The match was stopped after five minutes.

After the match was stopped, reports came out that the three players, along with Emiliano Buendia, would be forced to leave the country. Martinez spoke about the situation as he was leaving Argentina. Here’s what he had to say:

“We don’t understand what happened the other day. It’s something that has never been seen in football. It’s a shame for South American football. A match that big, at an international level that is suspended for those things, it’ll never be understood.

“We prepared for three days in Brazil to prepare for the match to start and then they cancel it. It’s a bitter feeling. We had everything to win and for political reasons, it was suspended and we had to go back.

“We stayed 30 minutes in the locker room to see if we would go out. After that they told us that we had to leave. And after that came the despair of whether we would stay there with the boys from England for 14 days. It was all uncertain. Chiqui (Tapia) helped, he backed us. I think him and the boys.

“I did not understand Brazil’s regulations. The entire world saw what happened. It was a match to enjoy.

“The four of us from England decided to leave (to join Argentina) for the love of the shirt. As much as those from the Premier League did not want to come, we still decided to travel. After winning the Copa America, everyone wanted to be in the group. It’s something beautiful. We assume the consequences.

“On a personal level, I needed to play these two matches to give as much as I can. It’s a shame, hopefully we win on Thursday.”