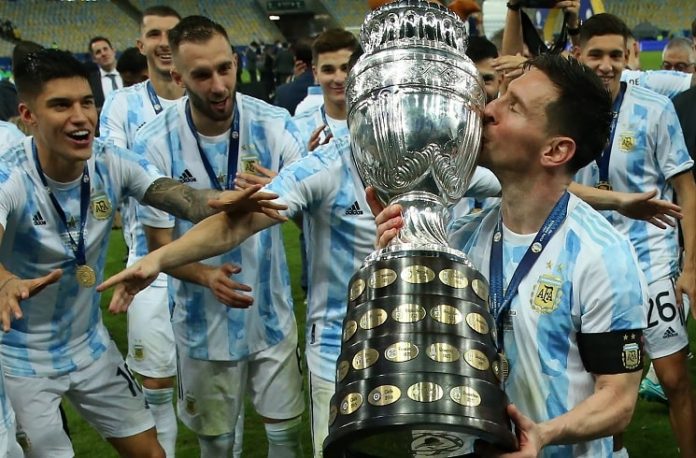 Lionel Messi commented on what it felt like winning the Copa America, the group of players and coach Lionel Scaloni.

Messi finally lifted his first trophy with the Argentina national team when they won the Copa America and he spoke about it all. Having won many trophies with Barcelona, this was his first with the national team. Speaking in an interview with ESPN Argentina, here’s what he had to say:

“After so much suffering, lifting something with the national team was special… There was a part of the journalists that treated me as a failure and that I didn’t feel the shirt.”

“Everything I won was important, I was lucky to have won a lot of things in a row at my club and very fast and the blows came later. With the national team, it was blow after blow, that made it more important now. It cost a lot to get it.”

“When we won, I couldn’t believe it. I dreamed it so much that I didn’t understand what was happening. Honestly, I enjoy it more now when I see the images than that moment.

He also commented on the team:

“It’s a spectacular group. It emerged at the 2019 Copa America but already in 2015 and 2014, there was a group like that. What happens is much of the time, what defines it is winning or losing.”

In addition, he spoke about the coach:

“He was the one who grabbed the national team at a difficult moment, who believed and gradually built it up. He always knew what he wanted.”

Lionel Messi on winning the Copa America: “I don’t know where I’d place it. Everything I won was important but this was the most difficult. A lot of things happened and I won very quickly at Barcelona. At the national team, it was one hit after another.”