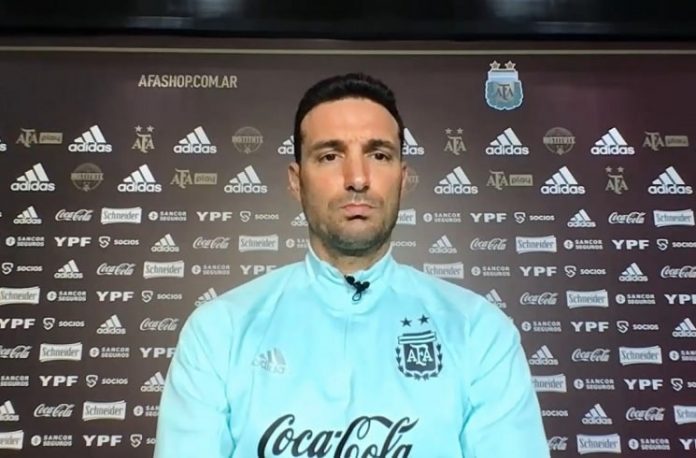 Argentina national team coach Lionel Scaloni held a press conference on Wednesday where he spoke about the team, the World Cup qualifiers, the World Cup and the players unavailable.

Lionel Scaloni spoke about the World Cup qualifying match against Bolivia on Thursday, mentioning the starting eleven. As we reported on Tuesday, with both Emiliano Martinez and Franco Armani out, Juan Musso would start the match. Talking about the eleven, here is what Scaloni had to say:

“Juan (Musso) will be the goalkeeper. He’s a guy that is very loved in the group. An opportunity is opening up for him and he has to take advantage of it. We are happy that he’s been selected and we know that he will do well.

Today, we will hold our last training session if the rain permits. We have to decide who will replace the guys that aren’t here. I’m going to take the afternoon training session to take a look. Even to make a few changes from those who played the five minutes against Brazil.

“I won’t change our plan, we should play Bolivia with the intent to win. Today, this match keeps me occupied and after that we will see what happens with the Brazil match. We already know Bolivia”

Scaloni also spoke about the team itself:

“We are a national team that is going to compete and in football, it’s difficult to say what position you’re in. We are a team that can makes things difficult even for the best. From there, the games have to be played.

“Italy are the last European champions and the other teams that reached the final phases are important national teams. We are here to compete. Saying if we can or cannot win the World Cup is not correct. It’s going to compete because anything can happen in matches and even more in a tournament.

“The idea is to compete with everyone and there’s no doubt that it will be difficult. We have seen teams that have won the World Cup and they don’t make it out of their group. The important thing is to compete, to be at that level and to know that this natinal team is not going to let anyone down.”

In regards to what happened against Brazil with the match getting stopped:

“I have no idea what is going to happen. I’m a coach and I talk about sports, what happened and what happened in the World Cup qualifying matches. Here, we played against Chile and Paraguay. They came in a bubble, they played and they left. The protocol is clear, regardless of the country. The health bubble was guaranteed by CONMEBOL and FIFA. That did not change. Argentina went, played and came back.

At no point did we think that what happened against Brazil could happen. It was all strange, very strange. We had taken the necessary precautions. The feeling we are left with is that of the entire football world that was waiting for a spectacle and we were left with nothing.

“I feel that many things have to be re-thought because what happened with the players cannot happen again. National teams that were left with players and some without players and some that came but had to return. We have time until the next match. Us coaches will meet, the federations too and we will look for a solution. This cannot continue for the next match.

“After the match against Venezuela, the players spoke with me and told me the circumstances going on in their clubs. We knew about their availability and that they had done the impossible to play but there’s a moment in the heads of the players where they think about many things and not about the match.

“As a coach, I made the decision that after the match against Brazil, they can return to their clubs which is what they wanted too. I took that decision because I saw them as overwhelmed because their clubs wanted them back as quickly as possible.

“It’s situations that don’t have to happen again from any point of view. These guys have shown the desire to be here and we are grateful but we cannot put them in this situation. They have to come here with a peace of mind, to know that they come here to play and not have those worries.”