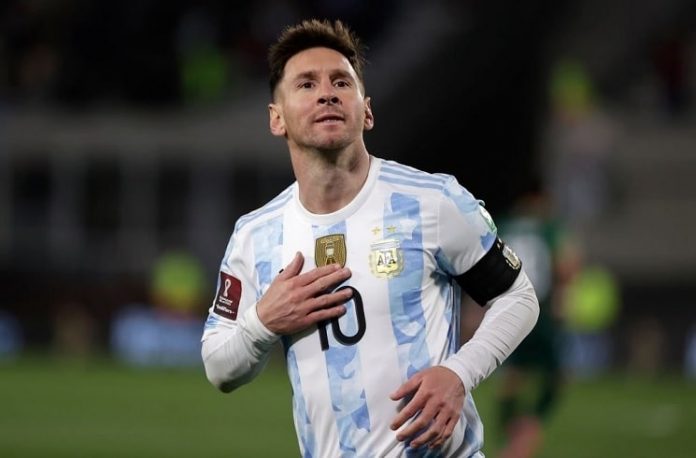 Lionel Messi scored a hat trick and broke a South American record in Argentina’s 2-0 win vs. Bolivia in the World Cup qualifiers.

Messi reached 79 goals with the Argentina national team as he overtook Pele’s record for most goals scored by a South American player for his national team. The first goal saw Messi play the ball through the legs of the opposition and his left foot from outside of the penalty are gave Argentina the 1-0 lead.

Angel Di Maria, who was arguably Argentina’s best player in the first half, played an outside of the foot low cross to Lautaro Martinez who scored. However, Lautaro was offside as the linesman raised his flag.

The second goal saw Lionel Messi and Lautaro Martinez combine, with Messi playing a pass to Lautaro who returned the ball and his right footed shot made it 2-0 for Argentina.

Two more changes for Argentina as Nicolas Gonzalez was brought in for Angel Di Maria and Angel Correa for Lautaro Martinez. Scaloni would make two more substitutions as Exequiel Palacios came on for Rodrigo De Paul and Lucas Martinez Quarta for Nicolas Otamendi.

Argentina would score their third goal and it would be Lionel Messi. An effort from outside of the penalty area was saved by the goalkeeper but Messi got to the rebound for his hat trick.