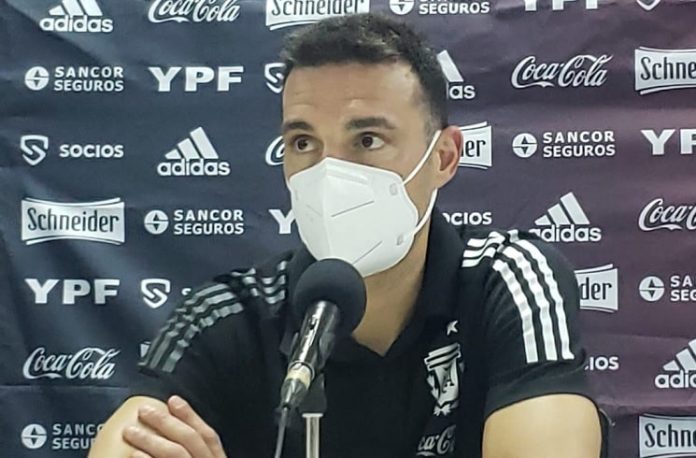 Lionel Scaloni saw his team control the match, create chances but unable to score. It was a 0-0 draw vs. Paraguay away with the next two matches at home. Speaking at a press conference after the match, here is what he had to say:

“The first half was almost all us, the second was more equal but we were superior and dominated the match. The qualifiers are difficult and they (the players) realized the difficulty of coming to play Paraguay and the different places. I think the feeling is good and that makes us calm. We missed scoring the goal, especially in the plays where it was very clear. The important thing is the team never gave up always kept trying.

“A very difficult opponent, they changed their way of playing for our way of attacking. The opponents play differently, they want to win against Argentina and you have to get used to that continuing to happen.

“We looked with a lot of passes, we created a lot of chances. Then we went with more speed because the game was very open. In football, sometimes you are superior but the result doesn’t go in your favor.

“We knew how Paraguay would play, always pressuring. I think the team was able to get through that pressure and create clear goal scoring chances. Paraguay is uncomfortable for everyone, not just Argentina. We knew they were going to be a difficult rival. We have to play in two days and it’s important that all the players are fresh and that everyone who enters can contribute.”

Scaloni spoke about Marcos Acuña getting substituted off:

“Let’s hope that Acuña’s situation is nothing. He had a knock and we preferred not to risk it. We have to manage their minutes.”

In regards to selecting Nahuel Molina ahead of Gonzalo Montiel:

“I have been saying it often. Nahuel gives us depth, speed. Gonzalo is fine but we preferred for him to rest this match. We have to keep him fresh.

“Here, we have to have everyone well. It’s very difficult coming to play these matches. In two days, we have another match. We fully trust him. We hope Gonzalo can play the next match.”

Regarding Joaquin Correa and Lautaro Martinez:

“The team had goal scoring chances. They couldn’t score. Lautaro has always been our striker. Joaquin’s match made me happy. He played a good match, he had chances, created a lot of danger. He was missing that goal but it makes us happy that he played like this.”