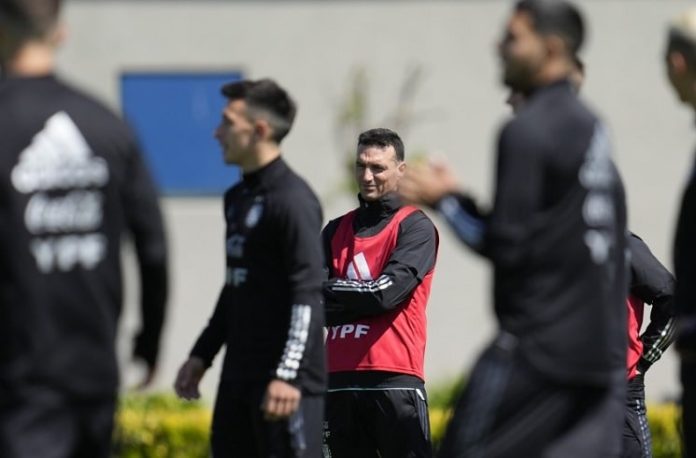 Argentina national team coach Lionel Scaloni held a press conference on Saturday as he commented on the team, the starting eleven and the World Cup qualifiers.

Lionel Scaloni spoke prior to the team’s training session on Saturday afternoon. Scaloni commented on the injuries and the starting eleven. Here is what he had to say:

“Whoever plays, we are calm because we are satisfied with the performance of the team. Tomorrow we will see how the players are to confirm the team. The rest of the players, Lautaro Martinez and Marcos Acuña aside, are well but up until noon tomorrow, I won’t have the team decided because it depends on their recovery.”

“I can’t confirm 100% that Lautaro Martinez will be there. I can’t confirm his presence because first we have our training this afternoon and whoever plays, we are satisfied.

“Those who played in the last match, we will see how they are. Acuña was substituted off with a knock and we hope that today he can move normally. After that we will decide.”

About who will start between Nahuel Molina and Gonzalo Montiel:

“I’m happy with Nahuel (Molina) because he is growing and he is joining the team. With Gonzalo (Montiel), we are satisfied, he’s already in the team. Tomorrow we will decide who plays.”

“We always play the same way. We believe that the striker has to be mobile, to drop back when he doesn’t have the ball and everyone does it. The players are very mobile. That is what we are looking for in this team. Including Lucas, when he plays with us, he does it as a second striker and he does very well. The profiles aren’t different, everyone is involved and has that mobility.”

He also commented on the match against Brazil which was stopped:

“I expect a solution as soon as possible regarding the match against Brazil because we are going to play them next month. We were the victims in this case.”

The match against Uruguay on Sunday:

“Historically, Uruguay are a difficult rival for Argentina. They are two historic national teams and I admire the way they play in the qualifiers, the World Cups. I have friends there and I like the way they understand football, we are very similar in that aspect. They are one of the best national teams in the world.”

“The match against Paraguay was very difficult, just as much as if we were playing against a European team. I’m sure that any European national team that plays there, it will be bad for them. But it would be nice to be able to play a team from there, although unfortunately, up until now it hasn’t happened.”