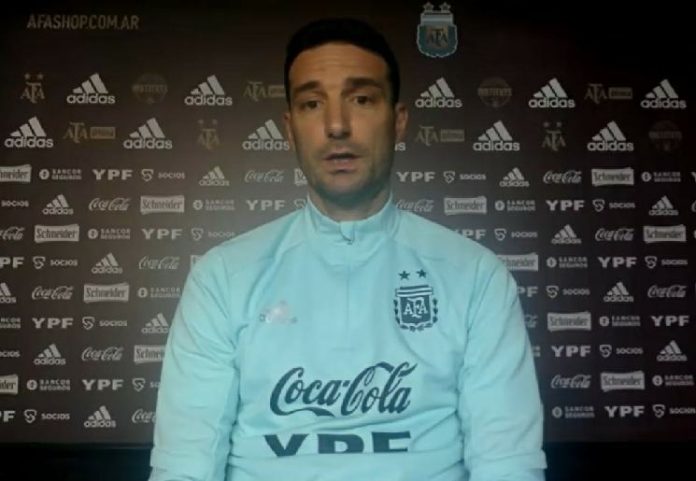 Argentina national team coach Lionel Scaloni held a press conference on Wednesday where he spoke about the team, Lionel Messi, Leandro Paredes, the match against Brazil in November.

Lionel Scaloni spoke to the press ahead of Thursday’s match against Peru in the World Cup qualifiers. This would be the third of three World Cup qualifying matches for Argentina in October, having drew the first away against Paraguay and won the second 3-0 vs. Uruguay.

Scaloni commented on the team and the match against Peru on Thursday. Here is what he had to say:

“I won’t confirm the team but I will stay along the same lines as the last matches. Maybe some retouches. It will be a very clear match. If we do a few changes it will be because the match needs it, not because of form.

“Peru play well with the ball, they have good players. They come here having worked together for a while, they have a very good midfield. They are not a team that is used to sitting back.”

“I think he is fine with the team, he feels comfortable with his team mates and that makes him even better. Without the team, his performance would not be as reflected.”

The Argentina coach also spoke about Leandro Paredes and his form:

“It doesn’t surprise me. He is progressing day by day and he gives us a lot of things. He is adding a lot to the aspect of when he doesn’t have the ball and for us, he is an important player. He’s in good form and we are happy with him.”

In addition, Scaloni spoke about the match against Brazil in November:

“Against Brazil, we will play in San Juan. Beyond that River’s pitch pleases us because of the grass and everything it offers, I think it’s only fair that the national team can play in other cities. There are other matches to go to and other places, hopefully in the same way.”

“The feeling is that the people feel an identity with these players. That is the most important thing.

“I don’t like to be euphoric or that negative. It’s clear that as long as the team works and gives us positive signals, we don’t have to tweak so much. We would only make modifications in question with where the opponent could hurt us. I ask the players not to relax.

“I can’t assure you that there are seven which are starters. We are playing here tomorrow and we have to go back with the same form because there are team mates behind them that are very anxious to play and are the first that when things are going well and their team mates win, are the first first to understand the situation.

“I ask them not to relax because their team mates train to play. That no one thinks they are a starter. I don’t dare say that they are starters but if there is a base in which we are confident with it’s because they have given us results. But if we see that there are no good signals, we have no problem in that someone else can come in because they’re at the same level.

“Beyond winning or losing, what I have been saying and what I will continue to say is that these players are not going to let us down. There will be matches where we will play better or worse, difficult matches, games that we have to play a different way because the opponent is better but the team dynamics are marked. The people feel identified with us and that’s what’s the most important thing. The result and everything that comes after is a result of all of this.

“The idea is always the same: To try and improve depending on the opponent. It’s not that we will adapt to the opponent but we believe that there are nuances that each team has and we have the availability of different players and we are taking advantage of them.

“But we always think about improving our team. Not thinking too much about the damage that the opponents can do to us. We try to improve in every aspect, we value that match after match. Sometimes it would be the same and something we will make a few changes.”

In regards to Sergio Aguero:

“His case, like the other guys that couldn’t be here, the most important is that they compete at their club and that makes things difficult for us. We have a squad of enormous talent, with great strikers and the most difficult decision is the final decision. It interests us that they play at their club, that they do well and we will take our time to take a decision.

“He is a player that we like and we value, every time he has been available, he has been with us. There are a lot of players called to the squad, you have to make decisions and a few have to be left out. I selected him for the last match, against Paraguay he was on the bench. They are decisions we have to take and he is a guy who has trained very well.”

He also spoke about the match against Uruguay and the 3-0 win:

“I won’t dare to say if the match against Uruguay was the best or not. But having played at home with our people, makes everything more beautiful. We have played very good matches and say that we were better but playing at home makes it more beautiful.”