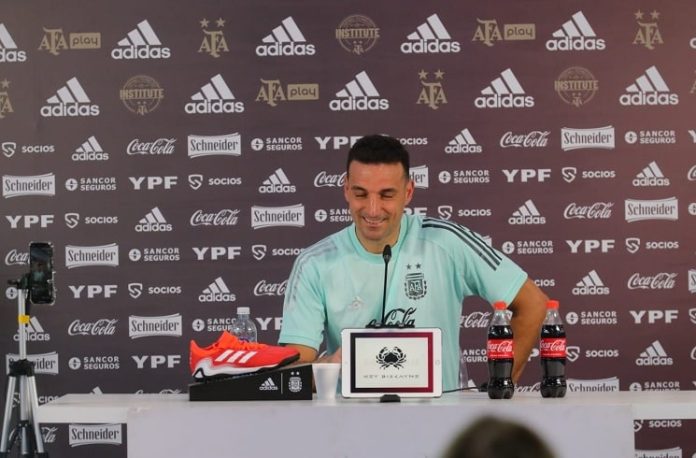 Lionel Scaloni commented on Lionel Messi’s injury and if he will play against Uruguay. Speaking at a press conference, here is what he had to say:

“Messi trained differently the first few days. Yesterday, it was more intense and in principle, he is available. This afternoon we will make a final decision.

“Having Leo (Messi) is easy, he always wants to play and I always want him to play. His attitude is a source of pride. Paulo Dybala could be a substitute, also Joaquin (Correa) or Lo Celso in the position more advanced and other players in midfield.

“We have different options. In principle, we think that Leo (Messi) is fine. We have plenty of players, that keeps us calm.”

Scaloni also spoke about Leandro Paredes and his injury:

“Paredes is ruled out and the rest of the team will be practically the same as the last match but I can’t confirm it. We have alternatives that could do just as well as him.”

Scaloni also commented on the young players in the team:

“It’s great that the young players came to train with the best. They are the future of the national team. We believe that they have the level and that they can show it.

“We want the youth players to mix with the older players. That they know what a call-up is, to eat together, to be together. There are players who have already shown that they can be an alternative.”

“With the form that Julian Alvarez is in, it doesn’t matter where he plays, at River or in Europe. He has made a very good leap and we are very happy with his form.”

“We talk to Kun (Aguero). We are sad because we don’t want this to happen to anyone. Hopefully he recovers quickly, we send him our support from here. We appreciate him and we want to have him with us.”

“Our team are the protagonists on the ball and when we don’t have it, we suffer. We will see what game Uruguay tries to impose, they are missing a lot of players.

“We are happy with this cycle and we want to continue on the same road.”