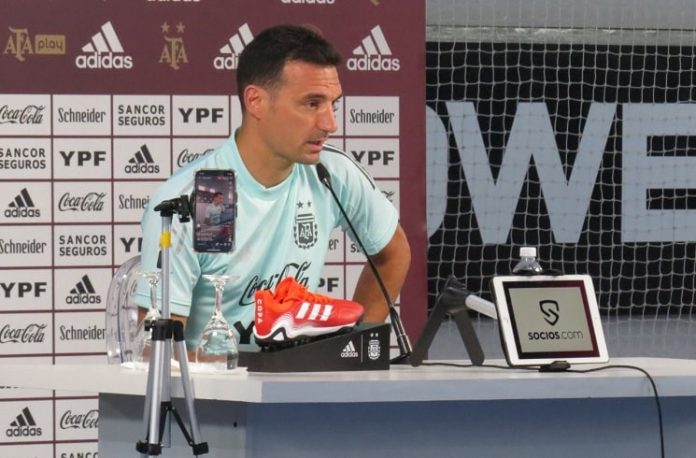 “He was already good, physically and in the end we decided that it would be best for him to play a few minutes for him to come to this one with a good feeling. It’s confirmed that Lionel Messi will play tomorrow.”

Scaloni also spoke about Paulo Dybala’s inclusion in the team:

“Paulo Dybala came here with a knock and we decided to take him out at half time, it wasn’t worth risking him. Now we are awaiting the tests to see what he has.”

In regards to Leandro Paredes and his fitness:

“Leandro Paredes trained normally. He’s well, we have to evaluate to see if we include him in the final team. He comes here having not played for many days, the important thing is he is well.”

He also spoke about the match against Brazil:

“It’s of great difficulty. Brazil leads the qualifiers and are already qualified. This Brazil team is one of the most vertical of recent times. They are already qualified for the World Cup and we know the difficult that this match will bring. We have to be cautious and know where we can hurt them.

“You have to play just as you always do, it doesn’t interest me that one of my players plays one way against Venezuela and another way against Brazil.

“I don’t believe that the rest of the opponents in the World Cup qualifiers are not as strong as Brazil. All of the matches are very difficult.”

“It’s better to be called up than not to be on the team and arrive as number 26 or 27. Our call-ups were always more than 23 because it gives us the possibility to look at them and to change out perspective.

“I have lived it and most of the time I was left out, still, I would come with desire and enthusiasm. I always preferred to be there. The choice is for the good of the team, it’s never more than that.

“Before the Copa America, the list was bigger because of the pandemic and for us it was a relief. If that had not happened, today, they would not be Copa America champions and those five more players lifted the cup because they wanted to be there. We never had a player tell us they didn’t want to be with the Argentina team.”

Regarding the World Cup qualifiers:

“If the qualification happens, we have to celebrate. We take it for granted that Argentina have to be there because of the difficulties the other teams have. Today, football is very difficult. We are in a relatively comfortable position with the exception of a few matches and that’s something to be emphasized. The difficulties of the South American World Cup qualifiers are the most difficult.”

“We didn’t set out to do something specific, to say that we want to win something. We set out to try to have things go well, that the players understand the message and that the people feel an identity with the team. We have achieved that, beyond having won. For us, it’s a win.

“Throughout my career as a coach, I think this was my best year, no doubt. Let me make this joke because 2021 is a special year for everyone. We will try to improve and there is always something to correct, that the player doesn’t relax. Without the players, we are nothing, we would not have achieved anything.”

About the possibility of playing European teams:

“I don’t like to talk about something that hasn’t been achieved. The majority of the call-ups are always with the same players and we are picking those who we think could be there.

“Now, some more names who can contribute have joined. The qualification is not yet done. Today, there is no possibility of playing against European teams, it’s useless to ask if it is not going to be possible.

“If the qualification is achieved, it would be interesting to play but it’s not very important either. The best thing is to be clear about what you want and to know that most of the players compete with the Europeans every Sunday.”

“Hopefully the people can enjoy the match. It fills up with pride that they want to come watch the national team.”