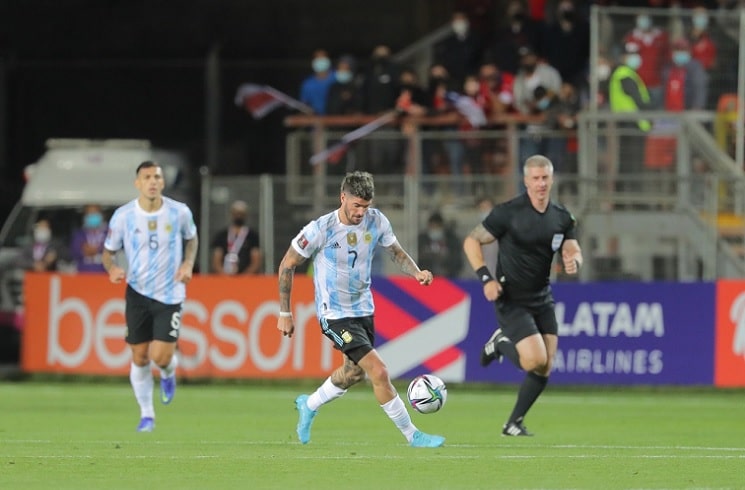 Rodrigo De Paul commented on Argentina’s 2-1 win vs. Chile while also speaking about the accommodation.

De Paul will miss Argentina’s upcoming World Cup qualifying match against Colombia due to suspension. However, he started the 2-1 win against Chile and has been a rock in midfield. Speaking to the media after the match, here is what he had to say:

“We have to win and be respected where it counts, on the pitch. It’s been more than two years that this team hasn’t lost but we are prepared for it when it happens. We have work, humility and the capacity to take on every match.

“The match that we played today is going to make us grow a lot mentally. When you represent your country, there’s no friendlies. Some might think that this group is relaxed for having qualified for Qatar but when we put on the Argentina shirt, we give 110%. I’m happy to see the way this team reacts in the face of adversity.

“We talk. We know that we can suffer at any moment. When a national team needs t win to go to a World Cup, you have to risk but we knew when to do damage, when to slow the match down and when to accelerate.

“We want to send a big kiss to Emi Buendia, the coach, to Ale Mac Allister, to Pablo Aimar. Because of COVID, which doesn’t want to leave us alone, it made it that they couldn’t be here. But this win is also for them, we continue to push towards the same direction and I hope that we continue in this harmony.”

The Argentine also spoke about the way the team was treated since they landed in Chile:

“I believe that things could have been done differently. We had to be at the airport for nearly three hours without being able to go to the washroom, making us unload our bags after two and a half hours of travel.

“We arrived at the hotel and it was 32° in the rooms and the air condition was not working. We opened the windows and there was the sound of sirens, many couldn’t sleep. This morning we had no water. I’m not saying if it’s good or bad, I’m saying as an Argentine and as a player and as a representative of the Argentina national team that any national team that comes to our country, we try to make them feel as comfortable as possible. And to win where it counts, on the pitch.”