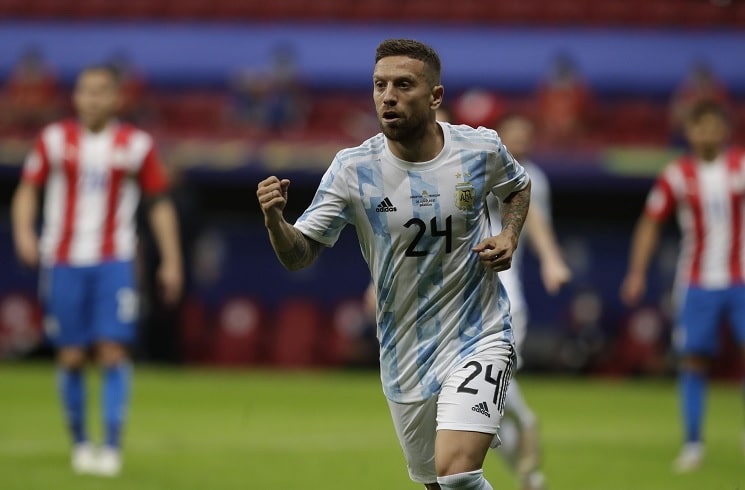 “What happened with the national team is priceless, all of us who are here today think that. Having won the Copa America cannot be equaled, not even by all of the money in the world. It’s the best, what any child aspires to win when they start playing football.

“This group has a great sense of belonging to the country. An atmosphere was created and a connection with the people that had not been seen for a long time.”

“When we met again in Madrid before taking the plane, you’re already bitten by the bug. And when we get to Buenos Aires, something grabs you, you feel different. It’s 10 days where you live as if they were your last because you don’t know when it can end.

“If we could not sleep, we would not sleep. We live every minute 100%. We want to enjoy it. When we have to leave at the airport, every one of us goes back to their club and you’re left wit ha sentimental void. When it’s cut, it’s a dagger to the heart.

“If we had not won the Copa America, maybe it would have rained down criticism. What we are trying to do is maintain a line and to keep doing things as we have been doing since the first day of this Scaloni process.

“We want to connect with people, that they identify with the national team. The team has been doing well for a long time, you have everything in your favor. People are happy, they applaud you, there’s no pressure, it’s all positive.”

In regards to winning the Copa America with Lionel Messi:

“It’s clear to us that we are part of history. Achieving it with Leo is also something that’s unique. We wanted to try to help him win a title with the senior team. It was clear to him that to win the Ballon d’Or, he had to win an important title. He knew that with the Copa America, he would be close.

“We went out running, we all hugged Leo, it’s the first thing that comes to mind. If I was Acuna, I would tattoo that photo, he’s the first one to get to him and he had the privilege of being in that moment, hugging him, I would have tattooed it on my back.”

“I think about the World Cup every day, at any moment. I believe it’s going to be a very beautiful World Cup. We are going through a great form. Even if we are no longer undefeated, because one day we are going to lose, the team has a base. It doesn’t shrink against anyone, it has personality, it has leaders and that gives you peace of mind and confidence.”