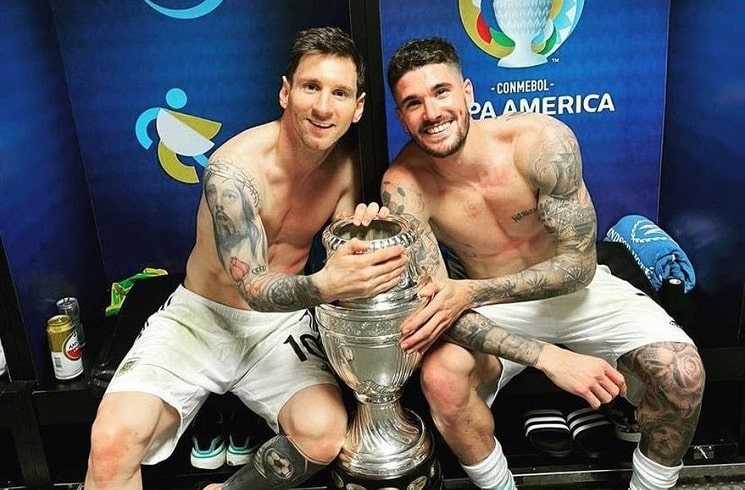 Rodrigo De Paul spoke about Lionel Messi and Sergio Agüero’s role with the Argentina national team at the Copa America.

De Paul has been an integral part of the Argentina national team. The heart beat of the midfield, 27 year old has formed a great partnership with Lionel Messi on and off the pitch. Speaking in an interview with TyC Sports, De Paul was asked about Lionel Messi getting whistled at by PSG fans and what he is going through:

“He is super used to the responsibilities, the pressures. It’s a moment he has to go through because they are out of the Champions League but football is like that. He has to be proud for having won everything he won.

“The dynamics of this sport are that at times it gives you and at times it takes away. Coming to the Argentina national team will do him well, he will change his mind a bit. I know he is very plugged in to everything that is coming. I’m anxious to see him again, the last call-up, he wasn’t there. Although we write to each other, we call, I feel like having a mate with him, talking a bit and asking him how he is doing. Which is the most important thing.

“I can’t tell you much about what I think… It’s hard to understand but well… I don’t agree. People will have done it out of anger but without thinking. But a guy like Messi can never be whistled at, anywhere in the world or for any reason.

He gave a lot to the entire world and brought us joy, we have to be grateful. But to each “their own.”

The Argentine was also asked about Sergio Agüero:

“Kun is one of us. We love him and it made us happy to know that he will be there in Qatar. We await him with open arms and we are happy about the decision made.

“He was part of it all and he helped us a lot. The last Copa, he enjoyed it a lot and from a place where he was not used to much because he’s someone who during 20 years scored a million goals and played every match. He had another role, he advised us a lot and he spoke a lot with Lautaro (Martínez) and Julián (Álvarez).”