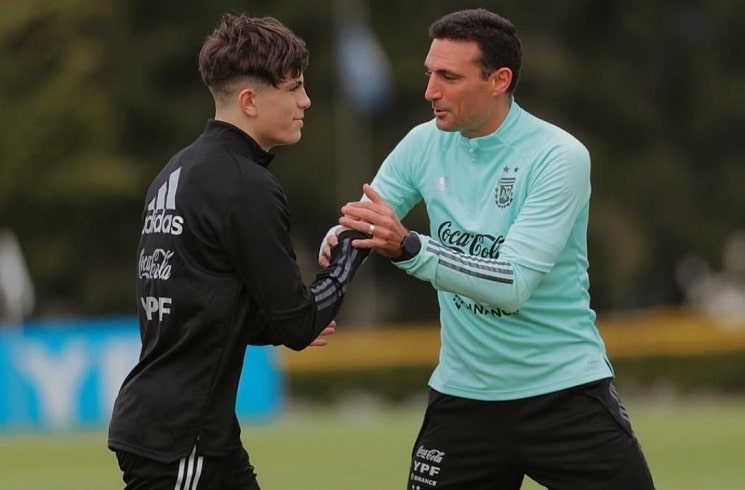 Alejandro Garnacho of Manchester United spoke about being called up to the Argentina national team.

Garnacho has duel Argentine and Spanish citizenship but Argentina national team coach Lionel Scaloni has called up the 17 year old to the team. He is presently with the Manchester United youth team and has helped the team qualify for the youth FA Cup, scoring five goals in five games.

However, he has yet to make his Manchester United debut but has already trained with Argentina. Speaking with club media, as cited by the Manchester Evening News, here is what Garnacho had to say:

“I have duel nationality, so this is a unique opportunity for me. I’m looking forward to the moment and make the most of it. I was born in Madrid, but my mother is Argentine, as is her entire family, and it will be an honour to be able to represent Argentina.

“Justin [Cochrane] and Darren Fletcher are two members of the club who are always very attentive to me, supporting me in all kinds of decisions. And outside the club is Javier Mascherano, who is Argentina’s Under-20 coach. Since they were interested in me two or three months ago, they have always been very attentive, worrying about me. He is very attentive, and I am very grateful.

“I have always dreamed of sharing a team with stars of this level, and of learning a lot from them.

“It is a dream to be able to share a team with some of the idols of my childhood, so I am going to take advantage of it to improve [as a footballer]. Likewise, I am always very motivated, because I am doing what I like, which is playing football.”

Argentina play Venezuela on March 25 and on March 29 against Ecuador.