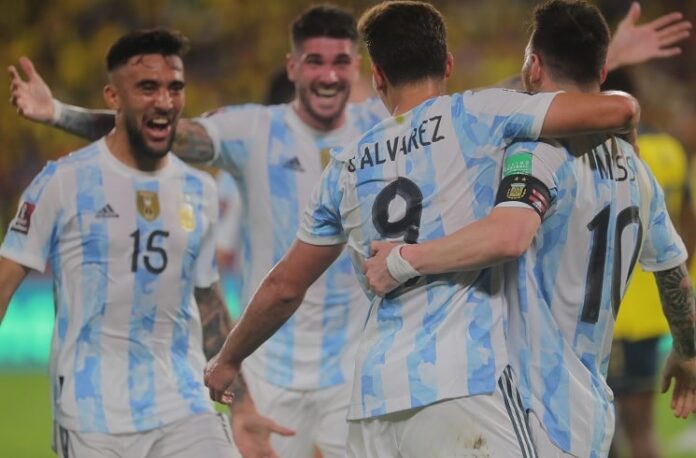 Julian Alvarez would score his first Argentina national team goal but Ecuador would get a controversial late penalty to draw level.

It was a first half which saw many defensive tackles by Argentina. With Ecuador seeing much of the ball and attacking down Gonzalo Montiel’s flank, it was a combined effort by Nicolas Gonzalez, Nicolas Otamendi and Nicolas Tagliafico which helped keep Ecuador goal less in the first half.

Rodrigo De Paul with an initial pass to Alexis Mac Allister who would find Lionel Messi. He would pass to Nicolas Tagliafico as he played a ball into the penalty area which found Julian Alvarez and he would score to give Argentina the 1-0 lead. Alvarez with a goal in his first start for the Argentina national team.

Leandro Paredes and Rodrigo De Paul would grow into the match. De Paul moving every where and Paredes with pin point passes.

The second half saw Ecuador continue to have a lot of the ball. Alexis Mac Allister received a kick to the knee as he was substituted out for Exequiel Palacios. Argentina national team coach Lionel Scaloni made four more substitutions.

A shot on goal hit Nicolas Tagliafico as the referee went to VAR to see the replay. After several minutes, it was a harsh decision by the referee as a penalty was awarded. Geronimo Rulli with a great save but Ecuador would score on the rebound.

Argentina are now undefeated in 31 matches, which equals their longest undefeated streak ever which was in 1991-1993 with Alfio “Coco” Basile as coach.