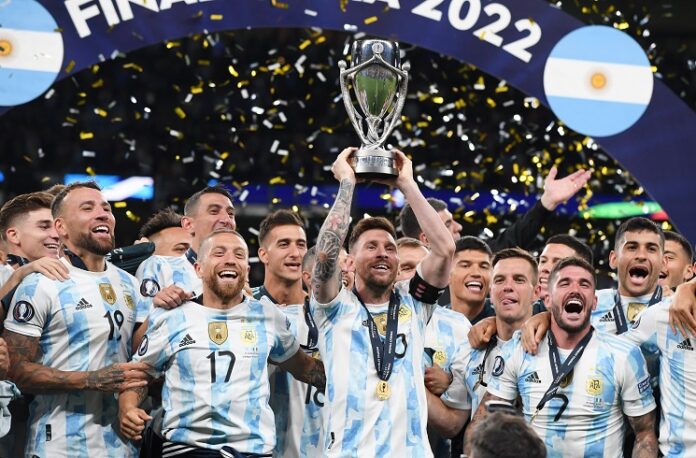 Lionel Messi spoke about the Argentina national team, the Finalissima win and the World Cup.

Messi was named as the Player of the Match of the Finalissima. With two assists, he won a second trophy in less than a year with the Argentina national team.

He gave two interviews following the 3-0 win in the Finalissima. In regards to the match against Italy, speaking to ESPN, here is what he had to say:

“The second half was spectacular. We were able to improve things that we already have, adding things to the game. Today was one more demonstration that this group is prepared for anything. We are here to fight anyone.

“It’s unfortunate that they did not qualify for the World Cup. It can easily be a World Cup quarter final or semi final match. They’re a great team.”

The Argentine also spoke about the national team:

“When we are together, we get infected. We get strength. It’s that way. This group, everything they did, was done that way, playing that way every match. Today more than ever.

“Details can define a match. Luckily, today I felt fine. Tired at times but we feed off each other and we give each other strength to help each other on the pitch.

“It’s good to get used to winning. This national team has gone several matches without losing. We must continue on this path, continue to grow. It’s what we are looking for.”

In a second interview with TyC Sports, he had this to say about the match:

“It was a close match until the first goal. They are a great national team and up until the first 20 minutes, it was difficult for us to control Jorginho, he was playing alone and we couldn’t get the hang of the pressure. But after the first goal, the game completely changed.”

About the national team:

“Finishing this way, with this happiness is something nice. This group transmits a joy and a happiness that is good, this has happened to me all year every time I would come. We played well and we showed it once more.

“We continue to grow and it’s what we are seeking. We look at the day to day, continue to improve and keep repeating that we are not the best candidates.

“We are going to compete toe to toe against anyone.”

On if they have to play a European team:

“I don’t know if we need it. We are aware of what we are and it doesn’t matter who is in ahead. We play every match the same way but yes it was a nice test because Italy are a great national team.”