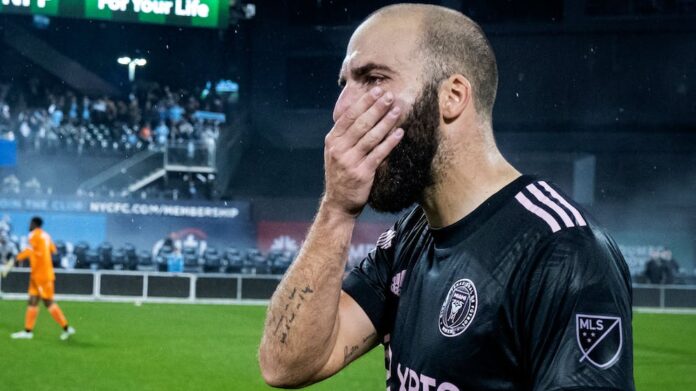 Gonzalo Higuaín likely played the last game of his career as he was in tears following Inter Miami’s game on Monday.

Higuaín announced a few weeks ago that this season would be the last in his football career. And following Inter Miami’s 3-0 loss vs. New York City on Monday, that game may have been his last.

An emotional Higuaín spoke to the media following the game at a press conference. Thanks to Inter Miami FC for the quotes, here is what he had to say:

“[After the game] I felt that the thing that I loved the most as a job during half of my life came to an end. It was 17 and a half years of my career, many images come to mind of everything you lived, everything that you fought for, how much I world, and I leave very proud knowing that I gave everything up until today. That’s the most important thing in life in anything that you do, leaving it all. When you know that you give everything, you can leave with a clean conscience, and I feel that way. Now I’m going to enjoy what is coming next with my partner, my daughter, my family, my friends, and I’m looking forward to that and being proud of what I was able to achieve.

“I’m leaving very proud of everything that we have achieved and of my teammates, the coaches, our fans. I wish them the best for next year… From the bottom of my heart I want to wish them the best because I’ve met some wonderful people at the club. My time here was some of the years of my career that I enjoyed the most and it gave me back the love for the ball that I had lost… I was very happy at this club and am very grateful to everyone at Inter Miami.”

Even before Higuaín joined Inter Miami, he had become a polarising figure for Argentina fans. Part of the fantastic four for Argentina between 2011-2014, he took part in a World Cup final and two Copa America finals.

It was those three finals which Argentina fans cannot seem to forgive and forget him for as many still blame him for missing opportunities in those three games.

Gonzalo Higuaín after his last game in his career. This via @MLS. 🇦🇷pic.twitter.com/efXewRWlzR