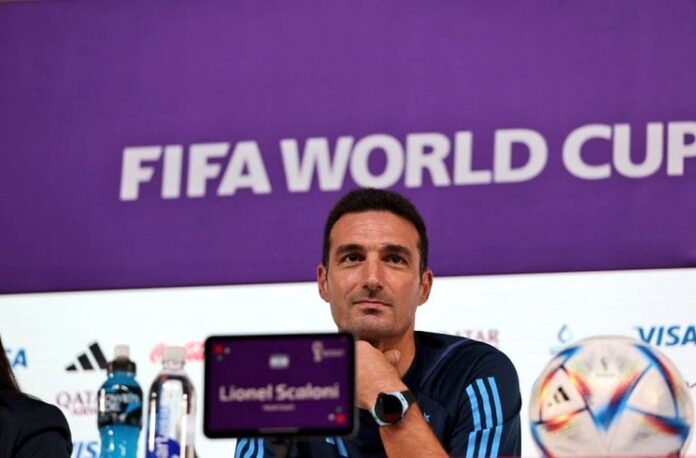 Argentina national team coach Lionel Scaloni spoke about the team, the loss vs. Saudi Arabia and the game vs. Mexico.

Lionel Scaloni spoke at a press conference after Lautaro spoke to the media. Scaloni spoke about the team’s kiss vs. Saudi Arabia. Here is what he had to say:

“The first day is shocking but the next day you get up and think about the next game. I have always said that we must be prepared for when we get the first blow, because it was all joy and in difficult moments is when we need everyone’s support.

“I am the first one who was prepared for this, it can happen, it’s football. What I am calm about is that every game we are going to play, we are going to give our lives and play our football.

“There are games that can be won and lost, unfortunately, it happened in a World Cup. But we are lucky it happened in the first game. You can lose a game, the issue is how you get up.

“Maybe we didn’t move the ball with enough speed to find the places quickly. After one, two, three touches and maybe that is why we had mistakes in our last passes.

“The players have their last training today which is where we will be defining the starting eleven.”

Scaloni also spoke about the nerves:

“Leo is doing well. We know that tomorrow we will have a different match. And we will give everything on the pitch.

“I don’t know who said he is not fit. I think there were pictures of him training and he trained well. He is feeling well. More than ever, we need everyone. His team mates. We have no questions at all about his physical level and emotionally he is feeling well too. No questions there.”

Regarding the game vs. Mexico:

“Yes, we have watched the game and we are already thinking about Mexico which will be entirely different in the way that we will play with a similar… We won’t change our style due to what happened on Tuesday.

“Mexico is an excellent team, we already said before hand when we found out about the group stage. They are an offensive team with a great coach and we have our style that is not negotiable. We might have gotten a blow in the opening match but we know we need to stick to our guns, to approach the game as we had prepared beforehand.”