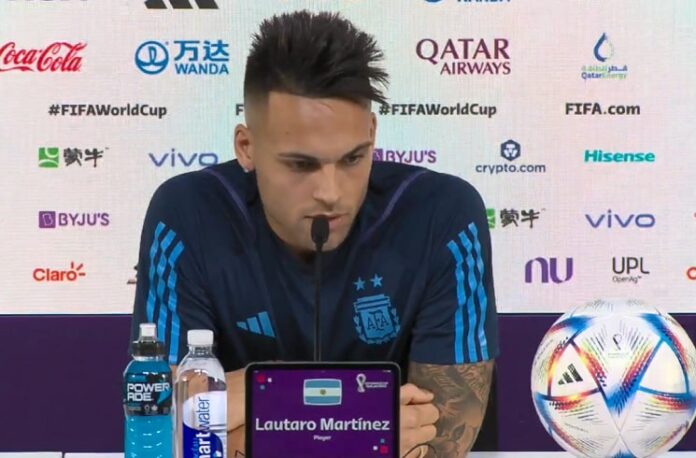 Lautaro Martínez spoke about the Argentina national team, the loss vs. Saudi Arabia, the game vs. Mexico and the pressure at the World Cup.

Martínez started for Argentina vs. Saudi Arabia and scored two goals which were ruled out for offside. He spoke at a press conference on Friday regarding the team. Here is what he had to say about the team and the loss vs. Saudi Arabia:

“We were defeated because of details, our mistakes. That is behind and we will think of what is ahead of us, Mexico. We have analyzed our opponents and we are ready to face them.”

“We were sad, were in pain because of the match that we had vs. Saudi Arabia. But as I Said before, that is behind because in a World Cup you don’t have enough time. What we need to do is to be ready to face a really strong opponent. We already faced them two years ago and we did well the last time we face each other. And now we have to be ready to prepare for the game and to think about winning.

It was a really hard blow to be honest. Because we were really excited because of our good streak, dynamics. We haven’t been through a situation like this in a long time. But we are a strong team, very much united and we know what we want. We will try to keep calm, to prepare as much as possible in the last hours because at a World Cup you don’t have a lot of time.

“This team, it’s main feature is to have the ball and of course the high quality of players. You enjoy it on the pitch, during training and that gives us joy. But also during training as enjoy, we enjoy it as that is the message from the coach.”

Regarding the pressure of having played in his first game at a World Cup:

“For many of us, this was the first match at a World Cup. We were anxious, excited, many emotions. Our families in the stands too. Then when you hear the whistle from the referee, everything is behind. We lost because of our mistakes, that is behind and now we need to think of the upcoming match. We need to think positively, to stay calm. Mexico is a tough opponent. We will have to have counter attack and make the most of our opportunities and know how we will be playing the game.

“There is no pressure because we rely, we are confident, we have trust in the coaching staff, trust in every player and we are keeping our calm. Yes, we were sad about the opening match but now we are thinking about Mexico. We are confident, we will break our backs for Argentina, for our fans.”

In regards to his two goals that were ruled out for offside:

“Regarding the VAR, what can I say? It still surprised me that if it was onside, it shouldn’t have been ruled out. But that’s not down to me. Regarding Mexico, we have played them, we have analyzed how they play, defend, attack.

“Tomorrow will be like a final because we need to win. It will be a really important match. We need to show that tomorrow on the pitch, we have shown that we have the players, we have the quality and that will be key.”