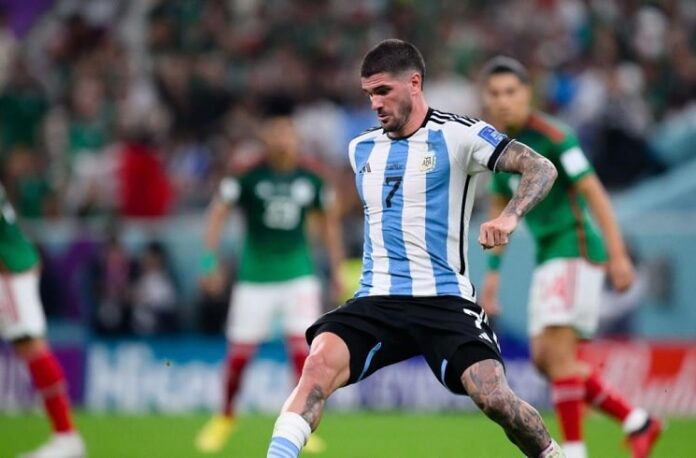 Rodrigo De Paul spoke at a press conference on Friday about the Argentina national team and the World Cup.

De Paul was the Argentina player who was at the press conference and spoke to the media before the game vs. Australia on Saturday. He was asked about having different team mates next to him at the World Cup. Here is what he had to say:

“I Was comfortable with all of my team mates. When we train, we switch positions. You know how much I have players with Pardes. Enzo joined us very recently but he has done very well.”

When asked about the game vs. Australia:

“It will be a similar game to that of Poland where we will have the ball but they will have very fast players. The coverage will be important. When we are attacking, we also need to think about defense. It will be difficult for midfielders and defenders so that the attackers will be able to move around.

“I think they are a fast team. Focusing on the flank players, with tall players, tall center backs. And I think that we don’t have to foul near the area. They have very fast players and I think that a strong point, when they are counter attacking. We have to be careful about that part of the game and that area of the pitch.”

He was also asked about the loss vs. Saudi Arabia:

“Yes, we found ourselves in a situation we were not used to. It had been a while since our last defeat. That is where you see the character. It was a moment for us to rise, to bounce back. To understand that this was an isolated situation. There were no doubts in the locker room. We saw Germany out, Spain were nearly eliminated. These were hard days, yes.”

Regarding his play at the World Cup:

“The way I read the game is always based on how the team is playing. But I think I went from low to high, that is true. But now, I feel very well. The coaching staff are very supportive and playing all 90 minutes is very important for me. And physically, I prefer it. I am feeling well. The team is excited. My team mates are enjoying it. Not just those starting but those on the bench. Against Mexico and Poland, the team played well. We are responding well.”

About Lionel Messi, Ángel Di María and the veterans:

“They helped us a lot. They explained to us the meaning of the Argentina colors. They take on all the responsibilities. And we should too. The first World Cup for many of us. It’s good that we share the responsibility but they are the one’s leading us all and we are happy and thankful for all that they do.”