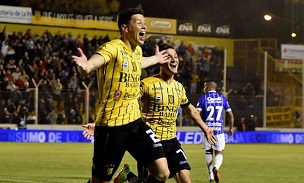 The current leaders of Argentina’s Primera Division, Estudiantes de La Plata, are outsiders in many ways, yet sitting atop the first division standings is nothing new for the team from the capital of the Buenos Aires Province. In 1967, Estudiantes became the first club not only outside of the traditional “Big Five” (River Plate, Boca Juniors, Independiente, Racing, and San Lorenzo) to win the first division title, but the first club outside of the Greater Buenos Aires Metropolitan Area. They followed domestic success up with three consecutive Copa Libertadores crowns and the 1968 Intercontinental Cup against Manchester United.

Through the years Estudiantes has had varying successes and failures, but have always had a core group of players and managers who know the club inside out such as World Cup winning manager Carlos Bilardo, World Cup runner-up Alejandro Sabella, and playmaker Juan Sebastian Veron who led the club to Libertadores glory in 2009, 41 years after the club first one it with Veron’s father, Juan Ramon, as the star man.

This year’s version of Estudiantes may lack the big name of Juan Sebastian Veron on the, but there is a good group of youngsters coming through especially young midfielder Santiago Ascacibar. The 19 year old, who is a passing midfielder who operates from deep, was probably Argentina’s only decent performer during the Rio Olympics and has even managed to improve his form in the early going for Estudiantes this season. Also in the side is former River Plate midfielder Augusto Solari, the first cousin of Santiago Solari, who made a name for himself for River in Argentina before successful spell for Real Madrid and Inter. With former Catania and Napoli man Mariano Andujar in goal, the defense has a much needed bit of experience along with defender Jonathan Shunke. On Sunday, they play host to struggling Temperly, from the souther suburbs of Buenos Aires, with hopes of making it a perfect 12 of 12.

In close pursuit of the Estudiantes, come the tradition big sides, with River Plate just two points back. The giants from the neighborhood of Nuñez were in action Thursday night in the Copa Argentina against Arsenal, where they were 1-0 winners. On the score sheet was River’s star striker Lucas Alario, just this week proclaimed as the future of Argentina’s national team by coach Edgardo Bauza.

Even if manager Marcelo Gallardo has to rotate the squad with a quick Thursday-Sunday turnaround, River will feel good to their trip to face Defensa y Justicia and their big name new signing, Jonas Gutierrez, once one of the pillars of Diego Maradona’s Argentina squad at South Africa 2010, as long as Alario is in the side. The former Colon hitman now has 22 goals in 44 games for the Millionaires and seems to be improving with each passing game in terms of understanding and off the ball movement.

Also on seven points is San Lornezo, who like River, were in action Thursday night. Pope Francis’ team did come out winner, but will be vastly disappoint to allow an away goal and only manage a 2-1 victory over Venezuelan minnows La Guaira. The good news for the saints, was the continued great form of former Boca striker Nicolas Blandi, who found the winner, and Fernando Belluschi, formerly of River Plate, Porto and Genoa amounts other clubs, who scored the opener before assisting Blandi for the second. With a number of other players with European experience such as Sebastian Blanco, Tino Costa, and Gonzalo Bergessio to go along with Paraguay international Nestor Ortigoza, San Lorenzo is easily one of the most mature and experienced teams in the league and will like their chances, even away from home, to last places Patronato who have zero points thus far.

Also on Sunday, Boca Juniors plays hosts to Quilmes in La Bombonera after a long week of jostling over the schedule with Lanus. The two sides are set to face off in the Copa Argentina next Wednesday the 28th of September and Boca, who desperately wants to win the cup in order to qualify for next year’s Copa Libertadores, were unwilling to give Lanus the advantage of playing Saturday, hence receiving an extra day of rest. As it stands, both clubs will kick off Sunday at 6 PM Buenos Aires time.

Lanus President Nicolas Ruso mocked his Boca counterpart Daniel Angelici by saying Lanus’ match was set to kick off at 5:50 PM, but he didn’t want Boca to complain about 10 minutes and had his game pushed back to start at the same time as the Xeneizes.

The power of Boca, and the other big clubs for that matter, in the board room has long been an issue for the rest of Argentina’s top flight, and Lanus, the reigning league champions who also beat Boca on the opening day of this season, will feel hard done by. After all, it is Lanus supporters who have been forced to rearrange their weekend in order to appease Boca’s board who were afraid of losing an advantage by playing a day later.

As it is, Boca will still be without the suspended Carlos Tevez and the Barros Schellotto twins look to stick with the struggling Dario Benedetto up front as they must win to keep pace: they are already three points behind arch rivals River, and five behind Estudiantes.

Lanus is also on only four points, but they have already been knocked out of the Copa Sudamericana at the hands of Independiente. Now, with the likes of Jose Sand looking to get back into his scoring ways and Mexican international Jonny Magellon still waiting for his debut win the match in Cordoba against Belgrano, the granate will certainly have one eye on the Boca match next week, not just to settle the score after the midweek scheduling shenanigans, but to ease the pain of international cup failure with domestic cup success.