Cesar Luis MENOTTI on the current State of Argentine football

We are far behind compared to Germany. The football in Argentina is very chaotic and disorderly. Young players are leaving too soon, there is no proper maturation and process of formation.

In Germany, they set up a project and maintained it. They do not have a “MESSI” but they have a “KROOS” or “HUMMELS”. They have a group of excellent players that aim to play as collective unit. They are a team that strongly defends an idea and respect it. They have great organization and culturally that’s different from Argentina.

Cesar Luis Menotti on his relationship with Jurgen KLINSMANN

I knew Jurgen from our time with Sampdoria (1997) and we had close relationship. He was already a World Champion with Germany and still wanted learn more about the game. 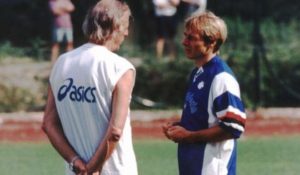 I met him and Joachin LOEW for lunch back in 2006 after Germany had defeated Sweden. He was a guy who wanted to outdo himself and was always listening to advice and opinions from others.

When he told me he wanted a German team which the people can identify with and enjoy playing. In the beginning those two received a lot of sticks but with the success they have continue to achived, its not just the Germans who enjoy watching them play.

Apparently, it was during that lunch session which KLINSMANN said “Ceasar advised me about the position of FRINGS and BALLACK and it was very useful. He’s the coach I learn a lot from”.