It was a good night for futbol Argentino last night.  River Plate advanced to the quarter finals despite last night’s 1-1 second-leg draw in the Monumental to Guarani.  Lucas ALARIO scored the winner for River. Lanus claimed a 2-1 aggregate victory as well thanks to Jose SAND’S 85th minute winner against visiting The Strongest. Both teams become the first two teams to qualify for the quarterfinals of the Copa Libertadores.

River Plate will find out who they will play in the quarter finals today in the deciding match between Brazilian club Atletico Mineiro and Bolivian club Jorge Wilstermann.  Lanus will play the winner of Thursday’s San Lorenzo vs Emelec match.

Here are the goals: 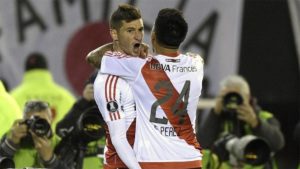