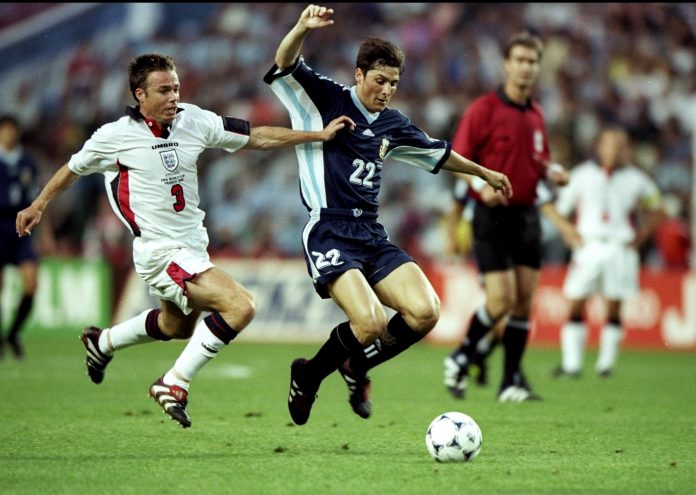 We are just 45 days until the start of the FIFA World Cup and in 45th place we have Javier ZANETTI scoring in the 45th minute at the 1998 FIFA World Cup against England in the quarter finals.

The build up to the match was tense. You had the actualy war between the two countries as well as memories of Diego MARADONA’s goals at the 1986 World Cup. The infamous Hand of God and the Goal of the Century which knocked England out 12 years earlier were still burning in the hearts of England fans.

What happened during those 120 minutes plus penalty kicks ensured that it was an absolute classic. Arguable the best match of that tournament and one of the best World Cup matches of all time. Four goals were scored but it was the one that was scored in the 45th minute which stole the show.

Daniel PASSARELLA’s men were awarded a free kick and up stepped Juan Sebastian VERON. The Estudiantes de la Plata icon was about to shoot the ball but he faked the shot and passed it to Javie ZANETTI instead. ZANETTI was hiding behind the English wall, it got to his foot and a left footed shot went past David SEAMAN.

An extremely smart play and one which was used in training by Daniel PASSARELLA. The match which had it all. Goals, a red card, extra time, a golden goal disallowed in extra time and penalty kicks. As an Argentina fan, it was great.

But the true magic came in the 45th minute with Javier ZANETTI’s goal.