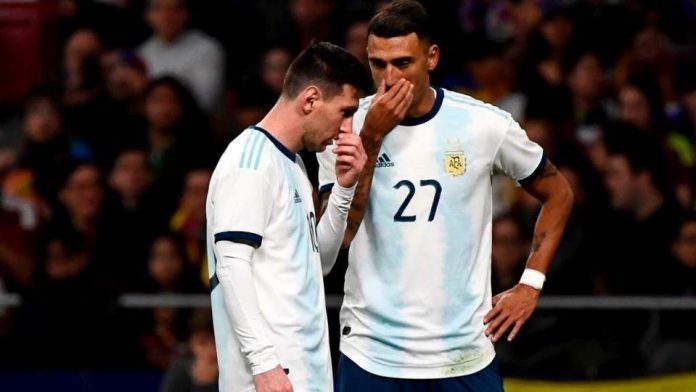 The following was written by guest writer Adam Grimshaw, whom you can follow over on Twitter @adamgeorgie.

When Lionel SCALONI took over the helm from his former mentor Jorge SAMPAOLI following a disastrous World Cup campaign it was simply to steady the ship. By November he was made full time coach with a contract stretching until the end of the 2019 Copa America.

Now that time has come and with it SCALONI has made his most important decision to date – who to include in his 23 man squad for the 2019 Copa America.

Difficult decisions
SCALONI’s choice was always going to be a difficult one for a national team with such an abundance of quality and a country so expectant and demanding of success.

As part of the 23-man squad that SCALONI will take to Brazil he has selected forward men Lionel MESSI, Sergio AGÜERO, Paulo DYBALA, Lautaro MARTINEZ and Matias SUÁREZ.

From his preliminary squad he has forsaken Atletico Madrid’s Angel CORREA and Gonzalo MARTINEZ of Atlanta United, while Chelsea national team veteran Gonzalo HIGUAIN was not even put under consideration due to retirement.

The burden of MESSI
Despite many dissenters in his home country, captain and Catalan hero Lionel MESSI is an easy pick for SCALONI.

MESSI is one of the key survivors of a World Cup campaign that incited one Argentinian TV network to hold a minute’s silence to mark the death of La Selección. In the end someone has to be a survivor, and someone has to provide the foundation to build anew – MESSI is just that.

It’s hard not to isolate Lionel MESSI, such is his mercurial talent. He stands head and shoulders above the rest as one of the only players in the world who can single handedly win his team a game. The fact that he hasn’t managed to achieve those feats for his country at pivotal moments is partly why the Argentine public remain so unconvinced.

That very isolation has become the key problem, creating a tumultuous relationship between Messi and his homeland. It was no more prominent than on the world’s stage last summer in Russia.

MESSI, though miles ahead of the rest, has his limits. La Pulga still needs the support of a team around him, that much was shown for Barcelona in the semi final of the Champions League this April. It will be no different at the Copa America.

Experience up front
Part of that enduring foundation up front is Sergio AGÜERO. MESSI and AGÜERO have a lot in common going into this year’s 2019 Copa America. Both players have once again been outstanding for their club sides this season and will go into the tournament in top form.

MESSI at Barcelona and AGÜERO at Manchester City have swept aside almost all that has stepped into their paths, collecting the spoils as they see fit. SCALONI is right to select these two ahead of the rest. It’s likely they’ll be first choice when Argentina face Colombia on 15 June in Salvador.

The biggest problem for MESSI and AGÜERO is bearing the burden. With 337 caps and 105 international goals between they will have to carry the team forward up front. Whether it will end in frustration and disappointment as it so often has remains to be seen.

The best of the rest?
SCALONI has been candid in his preparations for the Copa America, no more so than in his justifications regarding his squad selection.

The key problem that thr manager has inherited from his predecessor is what to do with the big guns after such an underperforming World Cup. While MESSI and AGÜERO will carry the torch, SCALONI has had a difficult decision of whether to back the tried and tested or to give others a chance.

Ultimately who he has selected up front is a muddled and confused flock of forwards. SCALONI has neither stubbornly stuck with proven attackers, nor has based his selection purely on form and merit. There is no clear philosophy.

But all three have serious questions marks surrounding their ability to perform on South America’s biggest stage.

Paulo DYBALA has struggled to find his best form this past season in Serie A, clearly uncomfortable with living in the shadow of Cristiano RONALDO. DYBALA is no stranger to playing second fiddle in the Argentina setup since he made his debut in 2015.

Claudio CANIGGIA has been DYBALA’s most recent critic. While DYBALA does have the talent, with only one international goal to his record so far, it seems unlikely given his current form that he will light up the tournament for Argentina.

Then there is former Racing wonderkid turned Interista Lautaro MARTINEZ. MARTINEZ has time on his side and there are high hopes, but he has been a frustrating prospect in his first season in Milan.

Despite superseding club captain and fellow countryman Mauro ICARDI as main striker, MARTINEZ failed to sufficiently capitalise on his chances in Serie A. ICARDI still finished as the club’s top scorer come the end of the season, but despite that MARTINEZ has been selected for the Copa America ahead of his rival teammate.

The most surprising inclusion is without a doubt Matias SUÁREZ. The 31 year old, currently plying his trade at River Plate, boasts neither youth nor international experience.

Córdoba kid SUÁREZ spent most of his career at hometown club Belgrano and in Anderlecht, before making the switch to River Plate this season. He currently stands as the only attacker in contention for a place to not score a goal for the national team in recent games. CORREA, MARTINEZ, ICARDI and DYBALA all produced in recent friendlies.

Tried, tested and brushed aside

The headline grabbing omissions have been left to Gonzalo HIGUAIN (retired) and Mauro ICARDI who will both be going on holiday early this year.

ICARDI has endured a difficult season. He and his spouse turned agent have long been embroiled in a public spat with Inter manager Luciano SPALLETTI and the club hierarchy, which led to him being stripped of the club captaincy and his place on the pitch.

Though ICARDI made a return to the field towards the end of the season he failed to score from open play since his spat. His form as well as his level of professionalism have obviously had a role in why he won’t be going to Brazil this year.

Mauro is tried and tested as a goalscorer for club and country, among the best in the world. Including him could have been a smart choice to have some experienced and incisive back up on the bench.

The impact of Argentina’s attack at this year’s Copa America remains to be seen. If it is to be third time lucky, then Argentina’s attacking players will certainly have to pick up their game. If they do, it will be made all the sweeter if they do the job on Brazilian soil.