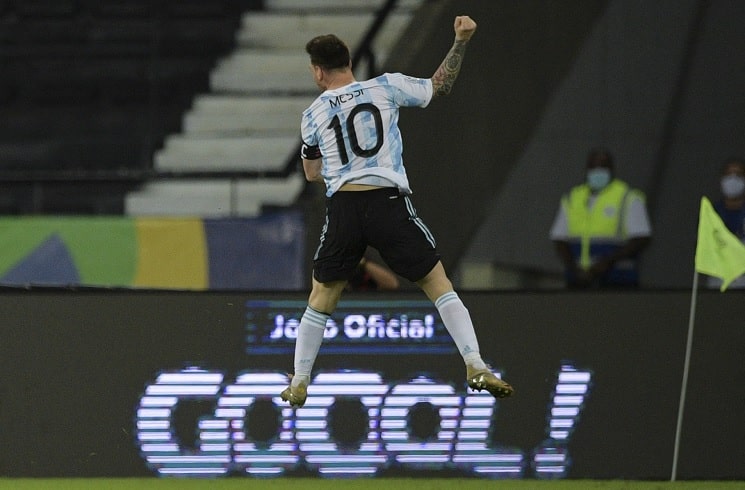 It was Argentina creating many of the first half chances. Nicolas Gonzalez with the first opportunity of the match for Argentina as a cross sent into the penalty area found the Stuttgart man but his header went just wide. A few moments later, Lo Celso would make a great pass into Gonzalez who would be one on one with the goalkeeper but his shot was saved.

Lionel Messi would open the scoring. A clearance by Emiliano Martinez found Lo Celso who was found and it was Messi taking the free kick and scoring to give Argentina the 1-0 lead.

Lautaro Martinez would get an opportunity as a ball into the penalty area would land onto Lautaro’s feet but his effort went wide.

The start of the second half was similar to the one which played out versus Colombia just a week ago. Chile pressure and a defensive mistake by Nicolas Otamendi let Chile into the penalty area. An initial save by Emiliano Martinez but kick by Nicolas Tagliafico onto Vidal and Chile were awarded a penalty kick.

Emiliano Martinez would make the save as the ball would bounce off the crossbar and back to Chile and Vargas would score the rebound. For the third consecutive match, Argentina were unable to hold onto a lead.

Messi nearly had an assist as he sent a cross into the penalty area but Nicolas Gonzalez missed his header. Scaloni would make three more changes were Joaquin Correa for Nicolas Gonzalez, Sergio Aguero for Lautaro Martinez and Nahuel Molina for Ezequiel Montiel.

Despite seven minutes of injury time being added, Argentina were unable to get another goal as the match would end in a 1-1 draw.

Up next for Argentina is Uruguay on Friday.