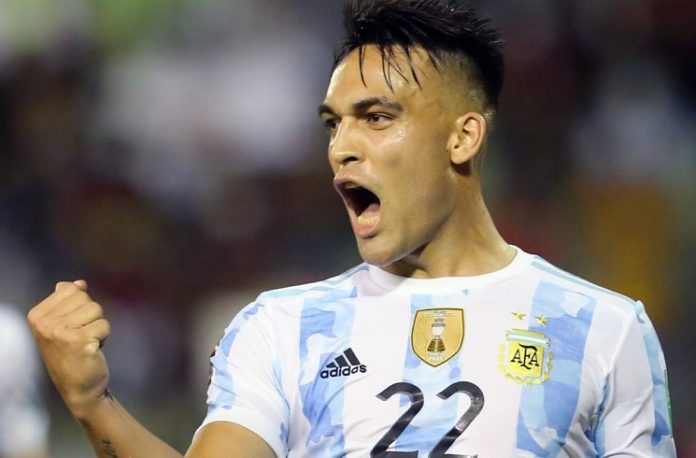 The Copa America winners continue their great form as they scored once in the first half and twice in the second half. A shot by Rodrigo De Paul which hit the crossbar was Argentina’s first effort on goal.

Angel Di Maria and Lautaro Martinez were throgh on a two on one but Di Maria’s pass was a heavy one as Lautaro was unable to get to it. However, shortly after it was a scary moment for Argentina.

Lionel Messi was tackled violently and an initial yellow card was turned to red as the referee went to VAR and changed his decision. Argentina, playing with a man advantage would make it count before the break.

Gio Lo Celso with a through ball found Lautaro Martinez who was alone with the goalkeeper and he would score to give Argentina the 1-0 lead.

Coach Lionel Scaloni did not make changes at half time but instead waited for the second half to start. It was Angel Correa on for Gio Lo Celso while Joaquin Correa was substituted in for Angel Di Maria.

Joaquin Correa would make it 2-0 as Messi would pass it to Lautaro and he would find Joaquin Correa who scored the second of the match. Scaloni would make two more changes with Alejandro Papu Gomez in for goal scorer Lautaro Martinez and Exequiel Palacios for Rodrigo De Paul.

Angel Correa would make it 3-0 after Joaquin Correa’s effort on goal was saved by the goalkeeper but Angel would get to the rebound.

Paulo Dybala would be brought in for Guido Rodriguez.

Venezuela were awarded a penalty after the referee went to VAR and while there didn’t appear to be any contact, the penalty was given. Emiliano Martinez jumped to his right as Soteldo would chip him and score.