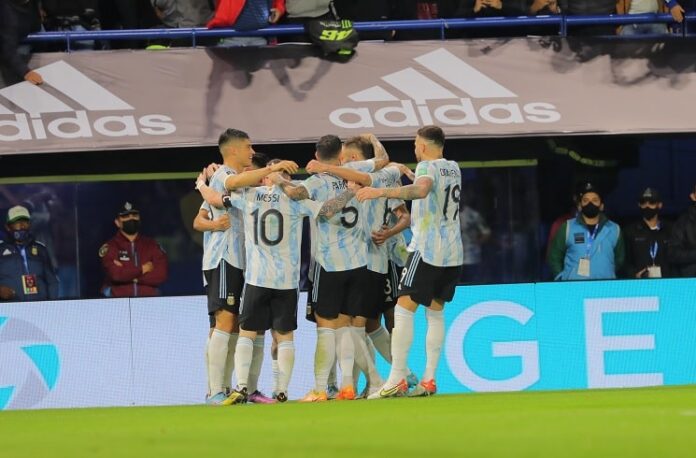 Argentina with a 3-0 win with Lionel Messi, Angel Di Maria and Nicolas Gonzalez all scoring as they are now undefeated in 30 matches.

A first half which was controlled by Argentina, it was a Nicolas Gonzalez goal through a great pass by Rodrigo De Paul which gave Argentina the 1-0 lead. Lionel Messi was as lively as he has ever been with incredible dribbles and precise passes.

Lionel Messi had an effort on goal which struck the arm of a diving Venezuelan player but no penalty was given. Fouled several times, Messi could have had two assists.

Joaquin Correa had a chance to make it 1-0 for Argentina as Lionel Messi played in a through ball which fell to Correa. He was one on one with the goalkeeper but his effort on goal was saved.

Correa had another opportunity to score as Messi once more played a great pass to him. However, Correa was not able to control the ball and the goalkeeper would get to it.

Another play whicch was started by Messi with the ball falling to Rodrigo De Paul. WIth him on the wing, he would send in a low pass into the penalty area and Nicolas Gonzalez with the goal from close range.

The second half saw Joaquin Correa miss another goal. A great pass in by Lionel Messi and Correa controls the ball and tries to dribble but loses the ball.

Angel Di Maria was substituted on for Argentina and was one of the best players on the pitch. A pass in by Rodrigo De Paul found Di Maria as he cut inside the penalty area. He would dribble around a defender and chip the goalkeeper to make it 2-0 for Argentina.

Messi would get his goal. Angel Di Maria would cut inside and cross it into Messi as he would score with his right foot.