Portuguese football giant Benfica are looking at Argentine defender German CONTI as a possible signing for next season.

The 23 year old is currently playing for Colon and has been touted as one of the promising talents to emerge from the Argentine league for quite some time. 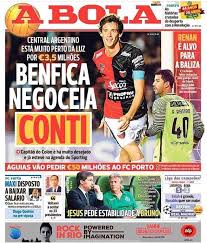 The Lisbon based side are keen to bolster their defence in the long run by looking for possible replacements to their current ageing pair, Luisao (37 years old) and Jardel (32 years old).

CONTI has been getting offers from clubs in Brazil and Russia in recent months but it seems like Benfica is now leading the race for his signature and are willing to match Colon’s asking price of €4 million. In December, he was almost on the verge of signing for Atletico Mineiro but the deal fell through the last minute.

According to Adriel DRUSSI of TyC Sport who spoke to Portuguese media DN Sports, CONTI is a natural leader after having captained Colon for the past few seasons. Not known to be fast and a physical type of player but CONTI supplements those aspect for his agility and being difficult to get passed in an one on one situation. Playing in Europe could help him to improve his game and has better chance to receive call ups for the national team.