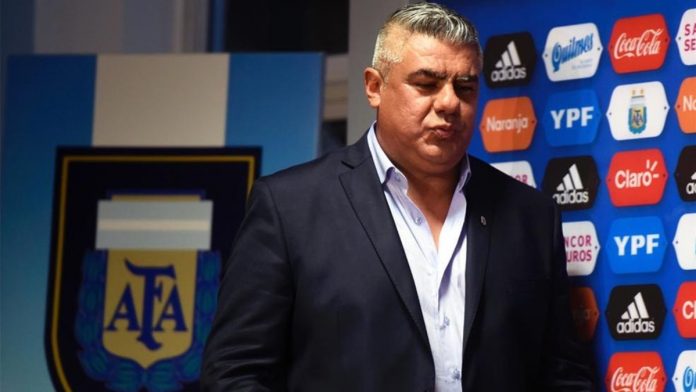 AFA president Claudio TAPIA spoke about a number of topics, including Lionel MESSI, the Argentina National Team and much more.

Under fire president of the Argentina federation, TAPIA’s decisions as well as those within the AFA have been questioned regarding many things. TAPIA stated that it was a mistake to say that the Argentina National Team belonged to Lionel MESSI. A massive thank you to Juan Arango (make sure to follow him @JuanG_Arango on Twitter) for translating the interview. Here’s what TAPIA he had to say:

“We made a mistake saying the national team was MESSI’s. He’s a human being and I think it was a mistake throwing all the responsibility on him. He can make a difference, but he is another player (on the squad). Football is a team game. There is no one payer that can win a World Cup.

“If we keep think that way, we will be in bad shape. We have to leave MESSI alone. We thought he could save us and that’s a mistake. This can’t happen again. We are looking at a project to be contenders again. But we have to do things right.”

In regards to the upcoming coach of the country, the AFA were thinking of contacting Manchester City’s Pep GUARDIOLA. Here were his comments about it:

“We asked about GUARDIOLA, but it was too difficult for us. We asked about GUARDIOLA and it was impossible. It would have cost us a lot of money. We spoke with ANGELICI. You have to have tremendous amount of backing (money). It is quite expensive, we’d have to liquidated (assets) and we still might not have enough.”

TAPIA did not even know how much other National Team coaches were being paid.

“We knew that there were coaches that earned as much as Jorge SAMPAOLI, but when we investigated, we didn’t know that it was THAT much. But we did make inquiries, we looked to have discussions, but it ended there.”

Regarding Alejandro SABELLA, Diego SIMEONE and Mauricio POCHETTINO potentially taking over as Argentina coach, TAPIA said there is still a lot left to do:

“I would like to hear the opinions of MENOTTI, BILARDO, BASILE, BASILE, MARTINO, BIELSA, BAUZA and many others to see what we have to correct. We also have to listen to historic players. This project has to have the best choice, for everyone.

“There are several coaches that could coach Argentina, but we can’t just look at one. I like POCHETTINO, SIMEONE and GALLARDO. They are good coaches. We can’t make an urgent choice because things come out badly if done urgently.

“We have to reset everything, this transition will help us cure ourselves from the wounds left by Jorge SAMPAOLI. We have to be clear as to what we want to do in order for us to not make the same mistakes.

“(Lionel) SCALONI is a young coach with personality and capability. He already has his badges, he like AIMAR are from the national team. They know what it means to wear the jersey. SCALONI could be up to the task, he was SAMPAOLI’s assistant when he was at Sevilla.

“I don’t regret hiring SAMPAOLI. when we went after him, no one complained. Today, in hindsight, it is very easy to blame him. We wanted to acquire the identity that his teams had and with Argentina we could not find it.”

Once more, a big thank you to Juan Arango (make sure to follow him @JuanG_Arango on Twitter) for translating.