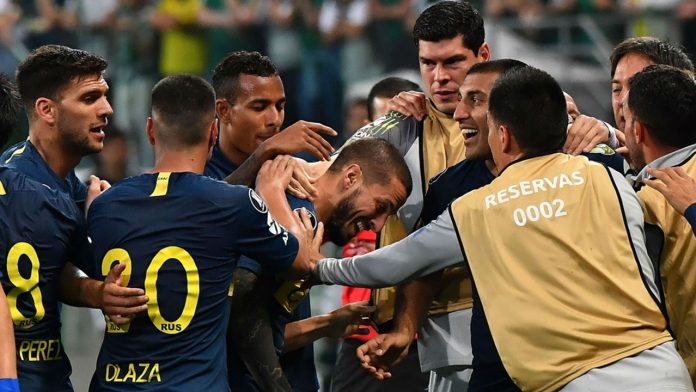 The “never happened” is happening as for the first time ever, we will have a Superclasico final in the Copa Libertadores as Boca Juniors play against River Plate.

Boca Juniors won the first leg 2-0 vs. Palmeiras as they took that advantage back to Brazil with them. It was the Argentine club who took an early lead in the first half with Ramon ABILA scoring to give Boca the lead. VILLA received the ball out wide and sent in a low pass which found ABILA as his shot bounced off the post and in. It was 3-0 for Boca on aggregate.

However, just seven minutes into the second half,  LUAN pounced on a loose ball in the Boca penalty area and his shot beat the Boca goalkeeper. It was 1-1 on the night and 3-1 on aggregate.

Things were going from bad to worse. A tackle by IZQUIERDOS meant a Palmeiras penalty kick. GOMEZ stepped up and made it 2-1 for Palmeiras.

In came the Boca hero of the first leg Dario BENEDETTO. He was brought in and instantly made an impact. His shot from outside of the penalty area beat the goalkeeper and any possible come back by Palmeiras was over. Boca Juniors had qualified for the final of the Copa Libertadores.

This now sets up a Superclasico final for the first time in Libertadores history. It’s also fitting because this is the last time the Copa Libertadores final will be contested over two legs. Moving forward, the final will be one match at a neutral stadium.