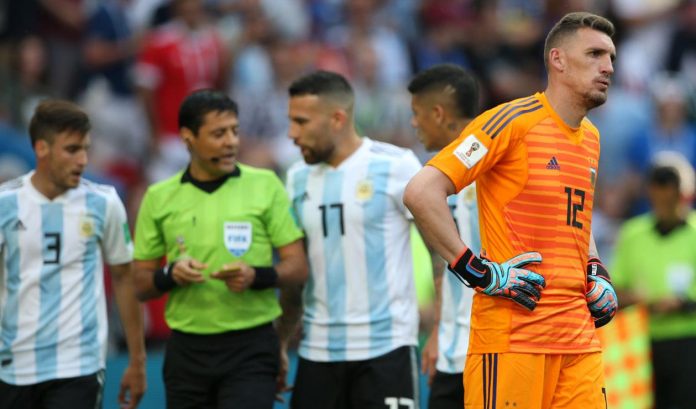 Of the 36 players which made Argentina’s preliminary list for the Copa America, only 11 remain from the 2018 FIFA World Cup.

Since the two matches against Nigeria and France, ARMANI has been selected by coach SCALONI and all signs point to him being the starter when the Copa America kicks off against Colombia.

In the back line, Nicolas TAGLIAFICO was undoubtedly Argentina’s left back. Following the elimination against eventual World Cup winners France and MESSI subsequently not being selected for his country, it was Nicolas TAGLIAFICO who wore the captain’s armband for his country. A born leader and also a domestic double winner with his club Ajax, the former Independiente captain will no doubt be the left back for SCALONI at the Copa.

Manchester City defender Nicolas OTAMENDI remains an integral part of SCALONI’s back line. With 59 caps to his name, OTAMENDI is the most experienced center back on the team and will most likely be selected as one of the two central defenders for the coach.

The second most experienced defender is right back Gabriel MERCADO. At 32 years old, MERCADO has had a knack of scoring important goals for his country. A crucial winner against Chile away from home in the 2018 World Cup Qualifiers was followed by the lone goal against Bolivia, once more in a World Cup qualifying match. His last goal came in the Round of 16 against France in Russia which gave Argentina the 2-1 lead. He could arguably make the squad on experience alone but whether he is a starter or not remains to be seen.

Marcos ACUNA has now found himself in two consecutive Argentina squads in tournaments. A starter in the 3-0 loss to Croatia last year, that game was the only one which he took part in at the World Cup. Not a defender, SAMPAOLI and now SCALONI have included the former Racing Club player as part of the defensive side of the list.

Arguably a pillar of Argentina’s midfield, Giovani LO CELSO criminally played zero minutes at the World Cup. He’s had a brilliant individual season for Real Betis, both in the league as well as the Europa League and has rightfully cemented his spot in the starting eleven for his country. He’ll have an integral part in deciding how well Argentina do in Brazil.

A veteran on the team, Angel DI MARIA’s tournaments for Argentina have to be seen as rollercoasters. A match winner in 2014 against Switzerland only to get injured in the next match against Belgium. A solid 2015 Copa America only to get injured in the final. He stepped it up at the beginning of the 2016 Copa America only to get injured and started the final despite visibly not being fit. In 2018 at the World Cup, he was frustrated but scored one of the goals of the tournament against France but the team was eliminated. As part of the more experienced players in the group, this tournament can surely be seen as a final good bye for Angel as he hopes to lift a trophy with his country.

Maximiliano MEZA was Argentina’s best player on the pitch in a humiliating 6-1 friendly match loss to Spain prior to the 2018 World Cup. What followed was a series of disappointing performances for his country. Yet despite those performances, MEZA finds himself on the preliminary list for the Copa America. His inclusion in the final 23 is far from certain.

An honorary mention goes to Manuel LANZINI who was injured for last year’s tournament.

Lionel MESSI has returned to the team and there’s not much that can be said which hasn’t already been mentioned about the great man. Carried the team on his back on more than one occasion, the only thing missing in his world class resume is a trophy with his country.

Sergio AGUERO has been one of the best forwards in the world for the past few seasons. A league winner with Manchester City, he was Argentina’s top goal scorer at the World Cup last year. One against Iceland and one against France after being substituted into the match, AGUERO is as sharp as he has ever been. Yet despite all of that, he might not make the final squad as he was not selected for any of the previous matches with SCALONI as coach.

Juventus star Paulo DYBALA has not had the best of seasons. DYBALA’s international career has reflected much of this season. That is to say very little goals, assists or great matches by the Cordoba native. At one point considered the future of the Argentina national team once Lionel MESSI would step aside, DYBALA now finds himself on the fence as he might not even be included in the final list of 23 players for this Copa America.