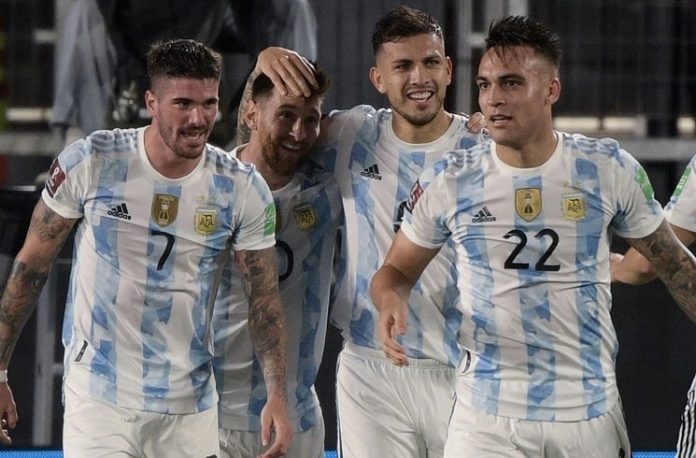 The Copa America champions are now undefeated in 24 matches as the team played one of their best, if not their best match with coach Lionel Scaloni. It was Uruguay who nearly took the lead several times but Emiliano Martinez showed why he has been nominated for the best goalkeeper award.

An early chance for Uruguay fell to Luis Suarez but Martinez with a solid right hand denied Uruguay a goal. Uruguay would get another chance shortly after but once more Martinez kept Uruguay without a goal.

Emiliano Martinez with the save of the match, once more on a Luis Suarez opportunity. The ball fell to Suarez and his volley was saved by Martinez, a truly great save.

Gio Lo Celso nearly gave Argentina the 1-0 lead. Lautaro Martinez played a ball in to Lo Celso as he went around Muslera but with several Uruguayan players on the line, Lo Celso’s shot hit the crossbar.

Lionel Messi opened the scoring for Argentina. Messi played an outside of the foot cross from outside of the penalty area in to Nicolas Gonzalez but Gonzlez was unable to get to it as the ball went through Muslera for the goal.

Messi is now on 80 goals for Argentina as no other South American players has reached 80 goals.

Rodrigo De Paul, who had a man of the match performance, doubled Argentina’s lead. A loose ball inside the penalty area as De Paul got to it before everyone and his shot went in for the second goal.

At 2-0 going into half time, Lionel Messi, Gio Lo Celso and Rodrigo De Paul were toying with Uruguay, passing the ball and dribbling around them. Cristian Romero was outstanding in the first half and it went on for the entire match.

De Paul made a great run down the right wing as his pass fell to Messi. He was surrounded by several Uruguayan players and he passed the ball back to De Paul who would get an assist. Rodrigo De Paul would play a pass across the penalty area which fell to Lautaro Martinez and he scored to make it 3-0 for Argentina.

Scaloni made two changes, the first was Angel Di Maria for Rodrigo and the second had Lautaro Martinez replaced by Joaquin Correa. Argentina nearly scored another as Joaquin Correa had a chance from inside the penalty area but was unable to score.

Two more changes for Argentina as Exequiel Palacios was brought in for Leandro Parede and Julian Alvarez for Nicolas Gonzalez.