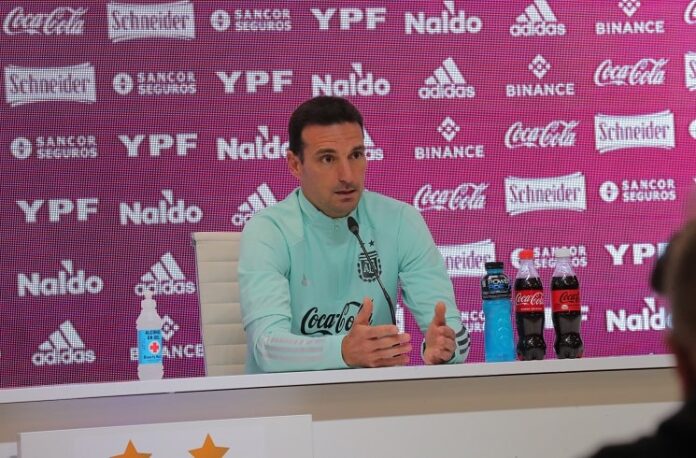 Lionel Scaloni spoke about several topics during Thursday’s press conference. From Lionel Messi and Franco Armani starting in Friday’s World Cup qualifier to the youth players on the team and to the absences of Lautaro Martínez and Paulo Dybala for these World Cup qualifying matches.

Scaloni also spoke about the World Cup draw on April 1 in Qatar and Argentina. Laughing about having to wear a suit as it’s protocol, here is what he had to say:

“Putting on the suit is complicated for me, I like to be comfortable, haha. Whatever happens, it’s going to be difficult, I’m not going to do the math.

“Whatever happens, happens. When the draw ends, we have to say that it’s difficult because it is impossible for it to be good. You have to play against everyone, to do it in the best way possible. A World Cup is a unique occasion and it’s so unpredictable that one doesn’t know what can happen.

“If I have to make a wish for the draw it’s that it brings me directly to the round of 16, ha!”

The Argentina national team coach also spoke about Sergio Agüero and his role with the team for the World Cup:

“It’s more than clear that he is well received here. I spoke with him and it’s important that we know the role he can play so that he doesn’t come here just to come here. Because it won’t do him any good either. I was clear with what I wanted from him, we talked about it and I would like him to be with us.

“I would like him to be around his team mates, to help with problems, anything that could happen in a World Cup. Typcial things that someone who is close to the players can do. After that, I don’t think there is a better image than Sergio to represent Argentine football.”

In regards to the friendly matches:

“The fixtures for European football are going to end between the 15 and the 22 and the match against Italy is on the first. Our idea is that as soon as they are done, we get together to have seven or eight days of training. And after that, from that match, we see what other rival we can play.

“The guys are coming after a long season and it’s not a question of us having them for 25 days for them to lose 15 days of vacation. You have to play a bit with that, wanting us to train but not keeping them from being focused and robbing them of their vacations. Which could take its toll on us in the future.”