Mundo Albiceleste
Home Argentina U20 Team Argentina U20 in trouble at Sudamericano after 3-1 loss vs. Brazil
Facebook
Twitter
WhatsApp
Telegram 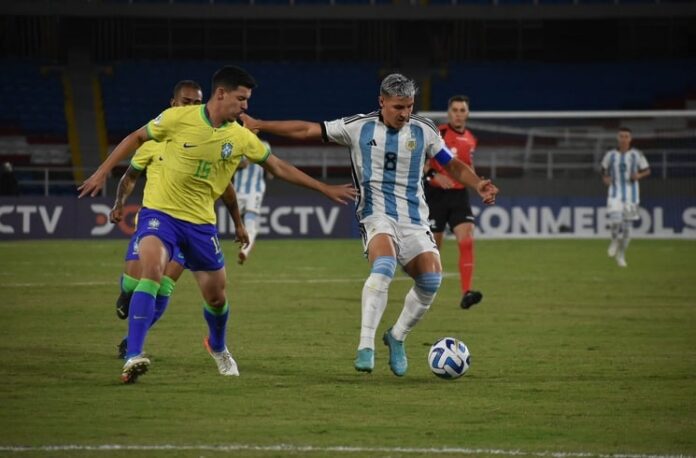 The Argentina U20 team are in trouble at the Sudamericano as they lost 3-1 vs. Brazil.

Javier Mascherano’s team are still winless at the Sudamericano after their first two matches. Following a 2-1 loss vs. Paraguay, they would lose 3-1 vs. Brazil on Monday.

An early throw in for Brazil got them their first goal as Mascherano’s team were unable to defend it and Brazil would get their first goal of the match. Argentina pushed and nearly got a goal.

They would hit the crossbar and Argentina would also get a penalty and an opportunity to get back into the match. It was the captain Infantino who stepped up to take it but a kick save by the Brazilian goalkeeper denied Infantino a goal.

After a handball in the opening match against Paraguay, defender Di Lollo would foul inside the penalty area and Brazil were awarded a penalty. Argentina goalkeeper Gomes Gerth would guess the wrong way and Brazil would score to make it 3-0 in the second half.

With Facundo Buonanotte injured, Agustín Giay was one of Argentina’s better players of the match but he would twist his ankle and get injured.

Maximiliano González would get Argentina’s only goal late in the match. A cross into the penalty area off a free kick and a header by Maxi Gonzalez as he would score his first of the Sudamericano tournament.

Nico Paz was brought on as a substitute and provided a nice piece of skill. He had started the match vs. Paraguay.

Still in fourth place, Argentina have played two matches and lost both. In last place is Peru who have lost all three of their matches. The top three teams in both groups qualify for the next round and here are the standings:

He is gonna be a fantastic CDM in the EPL, a complete midfielder.
pic.twitter.com/Myu28yuEbR