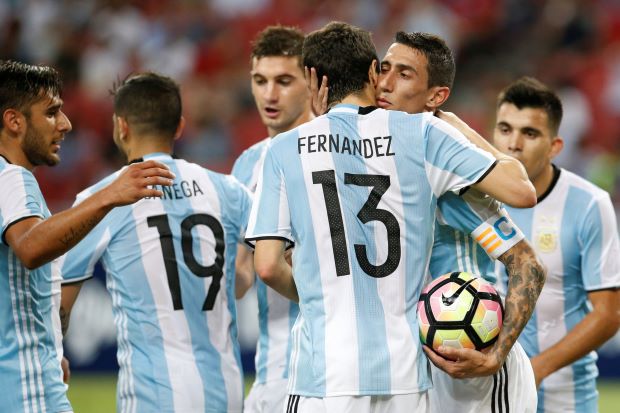 It’s a dream for any football fan to have a chance to meet their heroes.

I must say that the idea of Argentina coming to play in my shores even if it means against a low-key side like Singapore is most certainly a big welcome (though I’m aware that many were against to such friendly).

I knew that I couldn’t afford to miss this occasion even if it means that I need to fork out more (tickets were a bit pricy by Malaysian standard and this didn’t help the fact the relatively poor Ringgit currency compared to the might of Singapore’s Dollar!). I just had to be there, period!

However, family commitment didn’t allow to arrive in Singapore much earlier so that I could follow & chase the players all over Lion City and try to get up close for some selfie shots plus autographs.

Instead, I will be sharing the words from a young football fan and our guest writer by the name Rahul who did just that!

Even though the build up to this event took some negative publicity from the media following Messi and Higuain no show; the young man’s enthusiasm didn’t wane at all. He knows his football very well.

So, here’s his story on those crazy four days when Argentina came to his country. Do have a read and hope you all enjoy it.

We watch footballers week in and week out, follow their whereabouts on social media, glorify their skills and pay tribute to them with some snazzy alliterated Twitter handle, ‘Dynamic Dybala’, if you will. They are our heroes, they inspire us, they excite us. But all that fails to prepare us when, if we meet them someday, see them in the flesh. Living in Singapore reduces the chances of such encounters all year, unless they turn up here for some friendly, in which case the chances get magnified, but still not high enough. Juventus, Brazil and Japan have all tested the fantastic Sports Hub since its inception, but they did not pique my interest back then; I went to see Arsenal, Everton and Stoke, but wasn’t as keen to run behind them in their off-time. But Argentina was a different story.

I have to admit I’m not a die-hard Argentina fan, but the prospect of Messi, Dybala and Higuain was enough to buy tickets without hesitation. Armed with tickets and the company of friends, I looked forward to seeing the GOAT himself, but sadly fate had other plans. Messi playing here was too good a dream to be true, and his backing off from the game was met with a wave of disappointment, no less since Higuain had also withdrawn, while Aguero wasn’t selected. But there were plenty of stars to look forward to- one of whom I was a huge fan of, Paulo Dybala, along with Angel di Maria, who wasn’t a favourite of mine given the manner in which he left Manchester United. A local journalist asked me for a quote of mine regarding Messi’s no-show, putting a silver lining on a dark cloud for me, and after the local ESPNFC outlet rephrased my piece, things were going good. The weekend wasn’t even upon us, but there was a lot more to come.

My decision to go to the airport was an on-the-spur choice, made about an hour before the flight was supposedly going to land. Some deduction helped me to figure out the ETA of the flight; along with some friends, we ran from terminal to terminal in the airport, forlornly gazing at the immigration counter, asked the crew, who said it was the next flight. We sprinted to the VIP terminal, where we waited for an hour, and found ourselves videographed and photographed by the media out there, who were waiting for the players. Time past by, and eventually the team bus rolled out. And there we were afforded a glance of the players, only a few: Lucas Biglia was one, apart from the staff, along with the big fish: Dybala staring half-amusedly out of the window. “Dybala, Dybala’, went the squall of excited fans outside, with the mask celebration in full show. I donned the United jersey to show Romero- a plan that fizzled out. An appearance on Primetime News as a result- who would have thought? Messi was reportedly in the bus, though I didn’t see him- but there were a lucky few who caught him at the hotel. 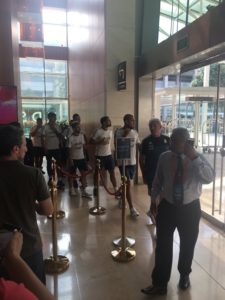 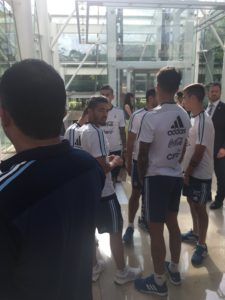 I couldn’t go to the training at a low-profile local ground the same night, but managed to run there in time for the next day. The bus rolled in again, and this time I was afforded much better views. Icardi, Joaquin Correa amongst others. Sergio Romero, United hero, waved numerous times. Dybala danced his way out, also waving. And Angel di Maria came out last, surprisingly signing some autographs to some unexpected chaos, but I couldn’t get myself there quick enough, and that was it. Left to peak through the gaps in the fencing, watching Sampaoli get his tactics in place, seeing the players warm up. Papu Gomez, di Maria, Dybala weaving in and out of defences; Guzman, Rulli and Romero taking turns to train while Icardi trained on the sidelines, recovering from injury. Maidana waving after I yelled his name. Dodging security was worth it to see the players train under closed doors, chances we’d never get again. There was more to come though the next day. 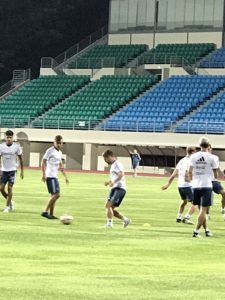 I planned to go with my friend to the hotel- a reconnaissance mission of sorts- to try and see if we could see the players, a plan which failed from the start given the class of the hotel and the impossibility that they’d be in the reception. Dejected, we went off on our way, but as we finished lunch, I saw via Paredes’s Instagram (amongst many others that I followed for the weekend) that they were at the SkyPark on Marina Bay Sands, our iconic landmark. Bill paid, we rushed into a cab chancing our luck, and what a decision it was. Waiting near the lift lobby, Manuel Lanzini turned up from nowhere, and I was beside myself, but then the rest of them turned up. Papu Gomez (should have danced!), Joaquin Correa, Tagliafico, Guzman, Paredes, Mercado, Alario, Ignacio Fernandez. Got an autograph from Maidana; a picture with Marcos Acuna, who was very cheerful. But the best of all was Dybala, La Joya himself. I’ve tracked him since his Palermo days, so this was absolutely surreal, one of the best players for his age, an incredible talent. I was stunned, though I still took a picture, and was overly enthusiastic, to the point when the security told me to calm down. I was stunned when they walked by me and I just stared. Figures on FIFA brought to life. To see Dybala in person made all the effort worth it, an opportunity I was grateful for. I was truly blessed. 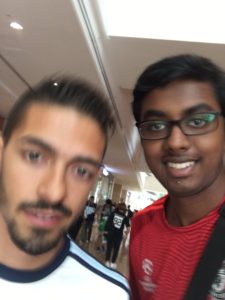 In comparison the game itself met expectations: good atmosphere, quality goals, a Sampaoli tactical masterclass. He will need to produce results when the team convene for the crucial qualifiers in September and October- his head will likely be safe, but they will have to make the World Cup. It was a refreshing change from the Bauzas of recent years; a tactically aware manager in the Bielsa mould (see his 2-3-4-1!) and his progress will be intriguing for neutrals and fans alike.

For me, this was an experience of a lifetime. A local reporter called me in the night to call me for my thoughts, adding gloss to an already fulfilling four days. To watch the stars we adore live was amazing; to meet them in person was stunning. The players we watch and criticise aren’t the ones we see in person; far from it, and so we should enjoy them for what they are. A selfie with La Joya was all I asked for, I got it, and I couldn’t ask for more. Gracias Argentina y buena seurte! 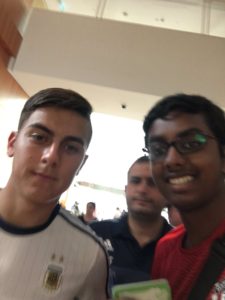 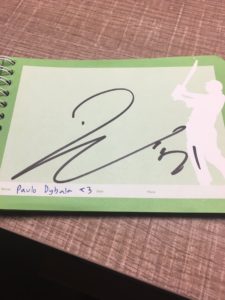 Mundo Albiceleste would like to wish a big thank you to our guest writer Rahul Warrier for sharing this piece with us.  If you wish to get in touch with him, you can follow him on Twitter at @rahulw_