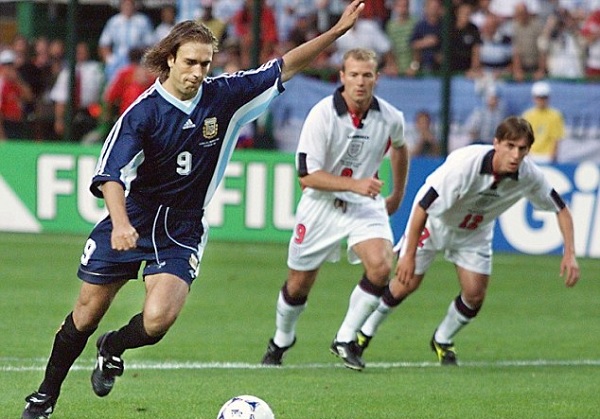 The last player to score for Argentina in a final which they won. It’s been 24 years since Batigol scored twice in the 1993 Copa America final for Argentina against Mexico in the 2-1 win. Speaking in an interview with FIFA.com, the former leading goal scorer for his country gave his opinion on Gonzalo HIGUAIN’s misses in the finals, Lionel MESSI and more. Here’s what he had to say:

The likes of Sergio Aguero and Gonzalo Higuain have come in for a lot of criticism in Argentina. What’s your view on that?

“They’ve had a lot of bad luck, especially Higuain. He missed key chances in the three finals (the 2015 and 2016 Copa America finals and the 2014 FIFA World Cup Brazil™ Final). I say it’s bad luck because he was the one who created those three opportunities. It’s not like a team-mate did everything and left him through on goal. His bad luck was that he didn’t put those chances away. Against Germany, for example, he only messed up in front of goal after he’d latched on to a loose ball because he was alert and tuned in, because he did everything a No9 has to do. He did everything right, apart from putting the ball away. If it had happened in another match or in the group phase, nobody would have said anything. In fact, we’d have all praised him for creating the chance in the first place.”

What would you say to Higuain?

“The same thing I’m saying to you now. I did say that to him. I talked to him. I can understand it because I was a No9. But the fans don’t know what goes through your head at a moment like that, especially in that last match against Chile, when he had the ball at his feet for a few yards. You can imagine what was going on. From the moment he gets on the ball till the moment he shoots, he’s picturing in his mind the chance he missed against Germany and the one in the previous final against Chile. All those thoughts make it harder for you. Maybe it would have been easier if he’d got a rebound and hadn’t had any time to think. But that’s football for you.”

There’s something we’d like to clear up. Is it true that you once said you never liked football?

“I did say it, but I was trying to protect myself against the press and the public. I said it, so they’d stop asking me things. I was finding the training all too much. You have to remember I was playing in Italy in the good times. There was a lot of pressure and everyone talked about football all the time, which I found pretty boring. It goes without saying that I love the game, the tactics, the training and everything that happens on the pitch. I wasn’t that excited about football when I was young, but it did become my passion. I ended up living and breathing football. Now, I have difficulty walking because of it, because I gave more than I had to give.”

“The truth is somewhere in between. I love the game and everything that goes with actually playing. What I don’t like so much are the interviews (laughs), the controversy and all the external stuff.”

Were you surprised to see Lionel Messi overtake you as Argentina’s leading scorer?

“I’d seen it coming for five or six years. I actually thought he’d have got there earlier! It’s a record that was close to my heart, but he’s beaten it and that’s that. I broke the record myself back in the day (laughs). It’s what happens.”

Gabriel, did you imagine that the goal you scored against Mexico in the 1993 Copa America would bring Argentina their last title to date?

“No! I thought we would win in 1995 too (laughs). But seriously, no I never imagined it. No way! It’s incredible that Argentina haven’t won anything since then. They’ve always been close. But when we won the Copa America in 1991 it had also been a long time since we’d last won it. Historically I would say it hasn’t been very easy for us.”

What do you think is the reason for that?

“It’s not easy. If you’re looking for reasons, one of them could be that Argentinian players are playing abroad all year. They are playing a lot of matches, much more than players from other national teams. They arrive at the Copa America tired or injured and can’t give 100%. Apart from Brazil, I can’t think of any other team where all 25 of their players are based abroad.”

What are you like as a fan? Did you watch the finals in which Argentina played recently?

“I watch but I’m pretty calm. Of course I’m an Argentina fan and I want them to win. I used to experience all those situations that the Argentinian players were experiencing as if it was me out there, I put myself in their shoes… But now I don’t get so nervous.”