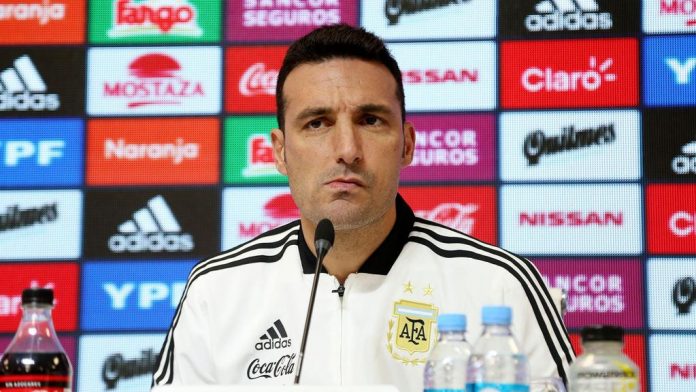 Argentina coach Lionel SCALONI held a press conference on Monday to discuss a number of topics.

Many people have given their opinions on either Lionel SCALONI, Lionel MESSI or the Argentina National Team the last few days. Beginning with former Argentina coach and football legend Diego MARADONA, the former number 10 said that SCALONI is not fit to coach his country. In reply, SCALONI said:

“I have nothing to say about it.”

In regards to the topic of Lionel MESSI, the two were reportedly set to speak at the FIFA Best gala but MESSI has to opt out due to family reasons. However, SCALONI did mention that the two spoke.

“I talked to MESSI about 10 days ago and after that we took a final decision that he wouldn’t be called up. We spoke about how the team played because Leo sees everything.”

The new list also included Manchester City’s Nicolas OTAMENDI, who makes his first appearance since the match against France. On including the City defender on the list, here’s what SCALONI had to say:

“OTAMENDI’s been called-up since we think he’s a good player for the Argentina National Team.”

The likes of Angel DI MARIA and Ever BANEGA were also a topic of discussion for the Argentina coach. SCALONI said this on the pair:

“I explained to them the situation, that we want the players called up to be the same ones, because we want continuity and to see if they can or cannot continue playing with the Argentina National Team. There’s a chance that the two can be called.”

Sergio AGUERO, who scored on the weekend and continues to play well for Manchester City was also spokem about.

“His level isn’t surprising, it’s how it always is. But I didn’t talk to him, we are trying to get the players to come and give their all. And the forwards we have now can ahve the chance to show that they can play for the Argentina National Team.”